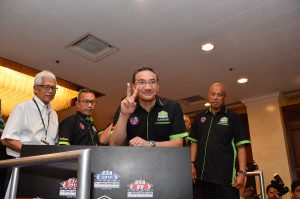 KUALA LUMPUR.22 April, 2016.  “Who Dares, Wins” is a motto made popular by the British Special Air Service and it perfectly sums up the brave stance at the Defence Services Asia (DSA) Exhibition and Conference 2016, where host Malaysia rose to the occasion against prevailing global odds.

At the Putra World Trade Centre (PWTC), where the four-day defence extravaganza was held from April 18-21, one could feel the patriotic “Malaysia Boleh!” war-cry (which is very similar to the “Yes, we can!” concept advocated by United States President Barack Obama).  Malaysia fired away on every cylinder to live up to expectations as Asia’s biggest defence-related showpiece despite plenty of hiccups in global economic climes and security issues affecting most parts of the world.

Thumbs-up was given by Malaysian Defence Minister Datuk Seri Hishammuddin Hussein who said the exhibition, first held in 1988, has evolved into one of the top five in the world. He said Malaysia made the best of negative geopolitical developments gripping the region, especially with China’s expansion into the South China Sea and the growing Islamic State threat. These had set the world’s gaze on Malaysia, in the run-up to DSA 2016, yet it proved to be a motivating advantage in hosting the biennial event here. 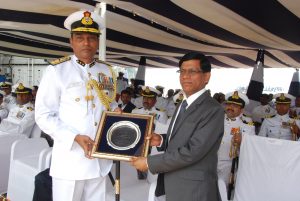 “DSA is now a premier platform for industry players to promote products, exchange ideas and technologies, forge partnerships and embark on strategic and synergistic collaborations,” he said. “The feedbacks have been very positive and support from exhibitors and industry players.”

The event  showcased 1,200 exhibitors and companies from 60 countries, with 34,000 trade visitors from 77 countries — the highest number of exhibitors to date compared to1,057 exhibitors from 59 countries took part during the previous DSA 2014.

Out of the 29 groups which took part, which included China, France, Germany, Italy, United States and the United Kingdom, the new entries from Belarus, Bosnia, Canada, the Netherlands, Russia, United Arab Emirates (UAE) and Ukraine also caught the eye. Rather surprisingly, too, was Turkey, which offered the biggest foreign pavilion with more than 25 companies showcasing state-of-the-art equipments.

Malaysia’s  Minister of Defence  Datuk Seri Hishammuddin Hussein said Malaysia got the right shot-in-the-arm and the overwhelming response received, even in uncertain economic conditions, turned out to be good tidings. Indeed, these are positive indicators that Malaysia is in a strategic position in the context of safety and security. “It has also defended its spot as one of the top five defence exhibitions in the world and probably the largest in Asia. This is a further edge in an uncertain economy,” he said. 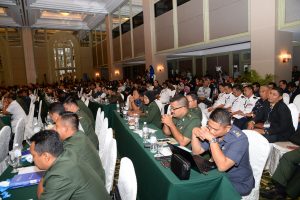 The Defence Minister noted that there was an “extraordinary” participation among local Small Medium Entrepreneurs (SMEs) in the event this year. He said the companies exhibited their products under one roof at the Malaysian Defence and Security Hall, while the DSA was a platform for networking as 1,200 companies from 60 countries are involved.

Hishammuddin said as result of the large presence and enthusiasm from SMEs, organisers rightly pushed the security and defence industries to the scope of the companies through exposure, as well as expansions.

Significantly, he said the event also focused on the participation of young people in the industry, which required heavy expenditure. “They need to be exposed and understand the core business of the ministry is ensuring the nation’s safety, security, sovereignty and peace. One day they will become leaders and they will articulate our agenda,” he said, adding that the inclusion of youth was imperative due to the social media landscape. 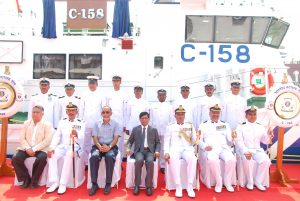 That a record RM2.9billion (US$716million) worth of contracts, over 24 major deals, were signed showed that the security and defence industry has proven to be unshaken amidst what analysts had earlier predicted to be global economic uncertainty. The Defence Minister said this was a 56 per cent increase from that of DSA 2014.

“I can honestly say that the DSA has the best installation yet, despite the global economic challenges,” Hishammuddin said in his closing remarks. Even the United Kingdom’s Minister of State for Defence Procurement, Philip Dunne believes Malaysia will also benefit from the flourishing industry.

Dunne said Malaysia would potentially create more high impact jobs as British prime contractors were offering global products, while businesses were growing very fast. “Because of the strength of the Malaysian education system, schools and universities were well equipped to produce graduates who can undertake more high impact jobs in the future,” he added.

For the record, last year, governments around the world spent around US$1.7 trillion on military products. Military expenditures in Asia went up by almost five per cent and that helped make DSA 2016 an increasingly important event in the global defence industry.