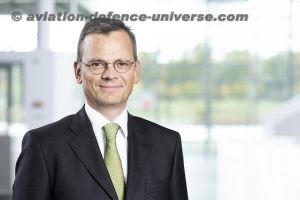 Amsterdam.  21 November 2018 . In the context of the ongoing management transition process led by its Board of Directors, Airbus SE (stock exchange symbol: AIR) has appointed Dominik Asam, 49, to succeed Harald Wilhelm, 52, as Chief Financial Officer (CFO) in April 2019. Asam, currently CFO of Munich-based Infineon Technologies AG, will join Airbus on 1 April 2019 ensuring a smooth handover with Harald Wilhelm, who remains in charge in his current role until the Annual General Meeting on 10 April 2019.

“We are very pleased to have Dominik Asam joining Airbus as CFO. Dominik is one of the most highly rated CFOs of the German DAX30. He has an outstanding professional background and he will, no doubt, be a great wingman for Guillaume Faury, who will succeed me at the helm of Airbus next spring,” said Tom Enders, Chief Executive Officer of Airbus.

As CFO, Dominik Asam will report to future CEO Guillaume Faury and become a Member of the Airbus Executive Committee.

Guillaume Faury, President Airbus Commercial Aircraft, said: “I am very much looking forward to working with Dominik to continue improving our company’s financial performance. A finance expert with an engineering and wide industrial background is a great choice for this mission.”

In 2011, Dominik Asam was appointed CFO of Infineon Technologies where he has been responsible for functions including Group Controlling, IT, Treasury, Investor Relations, Compliance & Risk Management, Export Control and Sustainability and Business Continuity. During his tenure as CFO, Infineon took top spots in Institutional Investor rankings and obtained a long-term Standard & Poor’s credit rating.

Before joining Infineon, Dominik Asam was Head of Group Controlling at RWE AG in 2010. From 2005-2010, he worked at Siemens AG where he held positions such as CEO of Siemens Financial Services and Corporate Vice President and Treasurer.

From 2003-2005, he headed Investor Relations, Mergers & Acquisitions and Strategy at Infineon Technologies.

A 1994 graduate in Mechanical Engineering from the Technical University of Munich, Dominik Asam began his professional career in 1996 in the Investment Banking Division of Goldman Sachs Inc. with postings in Frankfurt, London and New York. Further to his studies in his hometown of Munich, Asam holds a Master of Business Administration from INSEAD as well as a degree in Mechanical Engineering from the Ecole Centrale Paris.