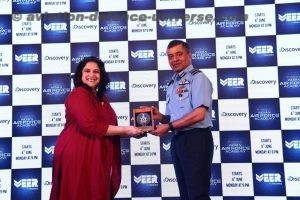 New Delhi. 30 May 30 2018 .  Discovery Channel is launching a special series on the Air Force Academy as a part of its  Breaking Point franchise. The new series gives a look into the training imparted at India’s premier Air Force training institution – Air Force Academy located at Dundigul, Hyderabad which is instrumental in shaping the future Air Warriors.

Speaking on the occasion, Air Vice Marshal SP Dharkar AVSM, Assistant Chief of Air Staff (Training), said, “The Breaking Point series on Discovery channel has emerged as the go-to series for all defence enthusiasts across the country. We are delighted to work with Discovery as we aim to a) inspire the youth of India to look at the Air Force as a career opportunity and b) inspire our countrymen, offering a never-seen-before insight into the life of an Air Force officer; their journey from a cadet to a Flying officer; the efforts they put in to flying the fighter jets and defend the nation when needed.”

Breaking Point: Indian Air Force Academy, packed with emotions including grit, pride, fear and utmost patriotism, captures the life of 4 cadets – Mudit Tewari, Priya Sharma, Amogh Bhandralia and Kartik Thakur – who are in various stages of their training at the Academy.The 4-episode series  will premiere on Discovery Channel every Monday starting June 04 at 9:00 pm and on Veer by Discovery, India’s first dedicated military channel, available on JIO TV and YouTube.

“The Breaking Point series has clearly emerged as break through programming here in India. We are aiming to break the 2 crore unduplicated reach benchmark with Breaking Point: Indian Air Force Academy,” said, Zulfia Waris, Vice-President & Head, Premium & Digital Networks, Discovery Communications India. “The journey from civilian to earning your wings is tough and nerve wracking. Each stage of this course has its own story, its own trials and tribulations and Discovery gives you an all-access pass to witness these transformations.”