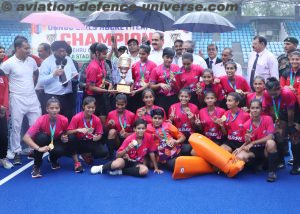 Sakshi Rana of the NCC Girls Hockey Team was adjudged ‘best player of the tournament’ for her outstanding performance throughout the tournament and Tamanna Yadav was declared ‘player of the match’ for scoring three goals in the final.

DG NCC congratulated the team for their hard work which enabled the team to clinch the trophy.