Deportees from Bahrain quarantined in Naval Base Kochi 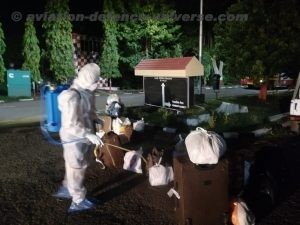 Kochi. 18 May 2020.  The naval quarantine facility at School for Naval Airmen (SFNA) is being utilised for 127 Indian deportees from Bahrain, who arrived at Cochin International Airport (CIAL) by a special Gulf Air flight on the evening of 17 May 20. The deportees were brought from CIAL by special KSRTC buses under the aegis of district administration and handed over to naval authorities at naval base, Kochi.

As per the directives of Government of India, the deportees were to be initially quarantined in a Military base – at Kochi Naval Base where they would be regularly monitored by trained naval health professionals. After the mandatory 14 days Quarantine period, the deportees would be handed over to care of State agencies for their further transfer to their home stations.

The Navy’s Quarantine facility at Kochi with a 200 bed capacity was set up in Mar 20 and has been serving as a transit quarantine camp for naval personnel returning to Kochi for duty after leave. The Camp is being managed by trained naval doctors and personnel from the Southern Naval Command.

The Indian Navy has spared no effort in supporting the nation in its battle against COVID-19 by undertaking missions like Operation Samudra Setu, wherein about 1500 Indians have been repatriated from Maldives.