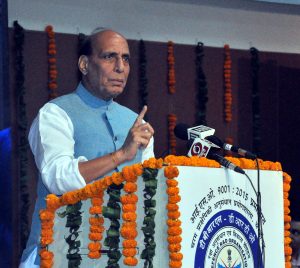 NewDelhi. 28 September 2022. Defence Minister Mr. Rajnath Singh visited Army Formation in Dinjan, Assam . The Defence Minister is on a three-day visit to Assam and Arunachal Pradesh till September 30, 2022, wherein he is scheduled to visit the frontline locations. He is accompanied by Chief of the Army Staff General Manoj Pande and General Officer Commanding-in-Chief, Eastern Command Lieutenant General RP Kalita along with other senior officers.

During the visit,  Rajnath Singh reviewed the operational readiness of the formation in the easternmost part of the country. He was briefed on infrastructure development along LAC as well as capability development & operational preparedness by General Officer Commanding, 3 Corps Lieutenant General RC Tiwari and other senior officers. The Defence Minister was also briefed on employment of cutting-edge military equipment & technology to enhance operational efficiency of the troops deployed in frontline. He commended the stellar work and yeoman services being rendered by all ranks of Spear Corps under challenging conditions.

On September 29, 2022, Rajnath Singh will visit forward posts to make on-ground assessment of the operational preparedness and interact with troops. He will also interact with members of second religious expedition to Athu Popu, an annual trek of local Idu Mishmi tribe which is being facilitated by Indian Army since 2021 as part of outreach and continued efforts towards supporting the locals & development of tourism.