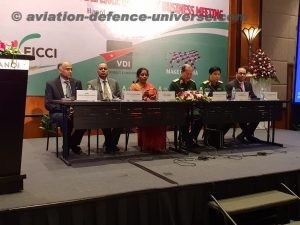 Hanoi, Vietnam.  13 June 2018. Bharat Electronics Limited (BEL) opened a liaison office at Hanoi in Vietnam.  Nirmala Sitharaman, Minister of Defence, Govt. of India while inaugurating the office said that there is immense potential to be explored by Indian defence industry in Vietnam in areas of co-production of platforms, spares, repair and overhaul services.

She handed over a symbolic key to  M.V Gowtama, CMD, BEL. The interaction was held between the defence sector companies from India and Vietnam, and senior officials of Vietnam’s military. The FICCI led Indian delegation saw participation by leading members from both private and public sector of the Indian defence industry looking to enter the Vietnam market.

In her keynote address the Defence Minister said that the sprit and mood of her discussion with the Defence Minister of Vietnam had been very forward looking and encouraging. “There is immense scope in the co-production of platform, spares, and repair and overhaul services”, she said. Citing BEL as an example, she said that the opening of offices of Indian defence companies highlights the seriousness of the commitment to doing business with Vietnam.

India has enjoyed robust defence cooperation with Vietnam, as both India and Vietnam largely rely on Russian military hardware, there has been significant bilateral cooperation between the two nations. This includes MRO services for Vietnam’s MiG aircraft, providing the Vietnam People’s Navy with submarine training, and providing technical training for vessel construction. India and Vietnam have agreed to take forward a proposal for training of Vietnam Air Force personnel on Su-30 aircraft.

Vietnamese Deputy Defence Minister of National Defence, Senior Colonel General, Be Xuan Trong was also enthusiastic for the future Indo-Vietnamese relations, saying that “Bilateral defence relations between the two countries was finally getting its due”. He invited Indian companies to set-up business in Vietnam with the intent of not just supplying to India and Vietnam but also to the other countries.

Parvathaneni Harish, Indian Ambassador to Vietnam said that the defence industry requires a particular focus and it traverses both economic and security aspects. He noted that the Vietnamese companies have developed an interest in Indian businesses looking at Vietnam for electronics, maritime, aerospace sectors. Bilateral interactions such as the one set up by FICCI have strengthen the comprehensive engagements with Vietnam.