Defence Manufacturing : The key to Make in India

By Vishal Nigam, New Delhi. India has emerged as the top destination for Greenfield investments surpassing both China and USA in the first half of 2015 which is an indicant of government’s effort to encourage foreign investments and ease of doing business in India. It is creating an enabling environment; defining new processes less complex, more efficient and transparent to attract foreign investors and as a result the midyear investment levels in 2015 have surged compared to the same period in the previous year. New Delhi is now looking pleasantly attractive in contrast to the rest of the world and, as a result India has moved up to the 55th position in the Global Competitive Index following a year on year decline since the turn of the decade. 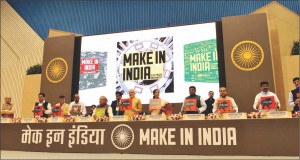 Prime Minister Modi since May 2014 has travelled to 28 countries and in the next couple of months is expected to visit Turkey, United Kingdom, Israel, Malaysia and Singapore. Modi’s rallying call to Make in India (MII); Digitise India and Skill India is generating enthusiasm amongst leaders from across the globe.

Defence manufacturing is quite clearly emerging as the key in Make in India and Modi’s ‘Grand Strategy’ designed to build best in class manufacturing facilities in nano-engineering and material sciences; robotics and adaptive automation; additive and precision manufacturing which in coming years will not only catapult India to the next level as an advance manufacturing hub for defence systems but also generate much needed employment. The decade ahead presents great opportunity for India and therefore effective implementation of Make in India will ensure increase in manufacturing as percentage of GDP from existing 16% to 25% by 2025. By the middle of the next decade, India will emerge as a $5trillion economy and hence manufacturing will have to grow at 15% CAGR to be valued at $1250 billion (25% of GDP) from the current level of $300 billion. This by any standard will be a big task and hence will require large amounts of investment by both the government and the private sector in manufacturing which in turn will also help fill huge gaps in employment by the turn of the decade.

In the past India experienced success in space and missile development with homegrown build to specification capabilities. India can realize similar successes in the defence sector provided it is able to nurture and build an advanced manufacturing ecosystem through a collaborative approach. India possesses skills in engineering to production backed by expertise in engineering, design and technology to qualify as a major global manufacturing hub for partner to print solutions provided friendly government policies are able to catalyse defence manufacturing.

While the intent of the current government is evident, it is the processes which are holding it back. Thus if India has to experience high growth in defence production where product and maintenance support is rooted in the country then processes and structures will necessarily have to be aligned with the changing policy framework. Though the government has taken initiative to recommend convergence of policies and processes through Recommendation of Experts Committee (ROEC); set up single portal for starting business and provisions for deemed approval however further utilization of tools in decision making will help to optimize end to end processes and automate non value-added tasks.

On the policy side the government has initiated several steps towards de-licensing. It has excluded major defence components from the list of items requiring industrial license; extended the validity of license (now 15 years) and through e-Biz portal simplified the process for applying for industrial license. Dual use items under SCOMET having both military and civilian applications have also been de-regulated and soon the government will populate category 6 with the list of ammunition.

Department of Industrial Policy and Promotion (DIPP) has sent an advisory to all departments and state government to rationalize the existing regulatory environment and integrate with the single window e-Biz portal. Several other measures like placing the check list of required compliances on web portal and introducing self-certification for non-risk and non-hazardous business will also help create a favourable business environment.

Within months after assuming office, the new government announced its decision to raise FDI cap in defence from 26% to 49% – quite clearly the most relevant policy initiative to attract foreign investments in the sector. The revised limit is a composite cap that includes all kinds of foreign investments by Foreign Institutional Investors (FII), Foreign Portfolio Investors (FPI), Foreign Venture Capital Investors (FVCI) and Qualified Foreign Investors (QFI) provided the cumulative investments excluding FDI of the Joint Venture (JV) do not exceed 24% of total equity. Also the notification has done away with the requirement of a single largest Indian shareholder having minimum 51% shareholding and a mandatory three year lock-in period for transfer of equity from one non-resident investor to another – thus singular game-changer with huge potential to attract large amounts of foreign investments.

The global defence industry is at a point of inflexion with market forces pushing both the demand and supply side drivers to the east of Greenwich. In India the demand for military hardware is growing at an unprecedented rate. Both domestic and foreign investors recognise India as an opportunity not only as a potential market but also as a global destination for component and system level manufacturing, provided the structure of the Indian defence industry is designed and developed to also export.

Again as a unique initiative the government for the first time formulated a Standard Operating Procedure (SOP) for Defence Export Strategy recognizing that both domestic and foreign investors will require government support to promote export of military hardware. The government announced several initiatives like setting-up web based portals to receive No Objection Certificates (NOC) for military stores, dispensed with the requirement of End User Certificate (EUC) for components, sub-systems and sub-assemblies by moving items out of Annexure 1 to ease exports. Government through its draft Defence Export Strategy has tacitly recognized that long term sustainability of the defence industry cannot happen by catering for domestic markets alone, but by positioning ‘Make in India’ in such a way that it not only addresses domestic demands but also caters to the global requirements which will connect large section of the Indian homegrown defence industry including the MSMEs with the global defence supply chain.

The ‘Make in India’ thrust in defence has therefore given the private sector much required confidence because, not only is the government ready to lend requisite support but also ready to initiate production of sophisticated defence equipments within the country by involving the battle-ready private sector companies to ‘unleash’ manufacturing in India.