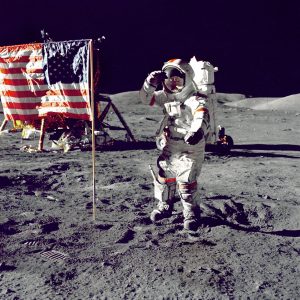 New Delhi. 20 July 2016. When forty seven years ago today at  10:56 p.m. EDT, American astronaut Neil Armstrong, 240,000 miles from Earth, spoke the most popular line, “That’s one small step for man, one giant leap for mankind,” human race made history and Armstrong became the first human to walk on the surface of the moon. 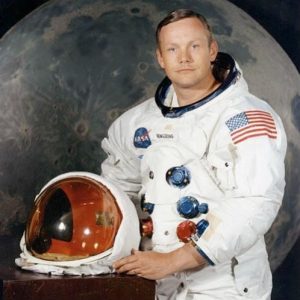 He planted his left foot on the gray, powdery surface and human race did something no one had done before- a man had walked on the moon. At 10:39 p.m., five hours ahead of the original schedule, Armstrong opened the hatch of the lunar module to make history for the human race.

After traveling 240,000 miles in 76 hours, Apollo 11 entered into a lunar orbit on July 19. The next day, at 1:46 p.m., the lunar module Eagle, manned by Armstrong and Aldrin, separated from the command module, where Collins remained. Two hours later, the Eagle began its descent to the lunar surface, and at 4:18 p.m. the craft touched down on the southwestern edge of the Sea of Tranquility. Neil Armstrong at this moment radioed to Mission Control in Houston, Texas, his famous line, “The Eagle has landed.” 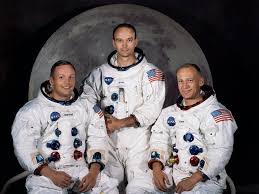 “Buzz” Aldrin joined him on the moon’s surface at 11:11 p.m., and together they took photographs of the terrain, planted a U.S. flag, ran a few simple scientific tests, and spoke with President Richard M. Nixon via Houston. 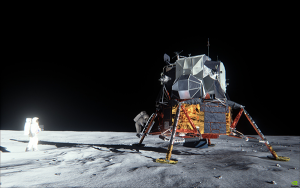 By 1:11 a.m. on July 21, both astronauts were back in the lunar module and the hatch was closed. The two men slept that night on the surface of the moon, and at 1:54 p.m. the Eagle began its ascent back to the command module. Among the items left on the surface of the moon was a plaque that read: “Here men from the planet Earth first set foot on the moon–July 1969 A.D–We came in peace for all mankind.”