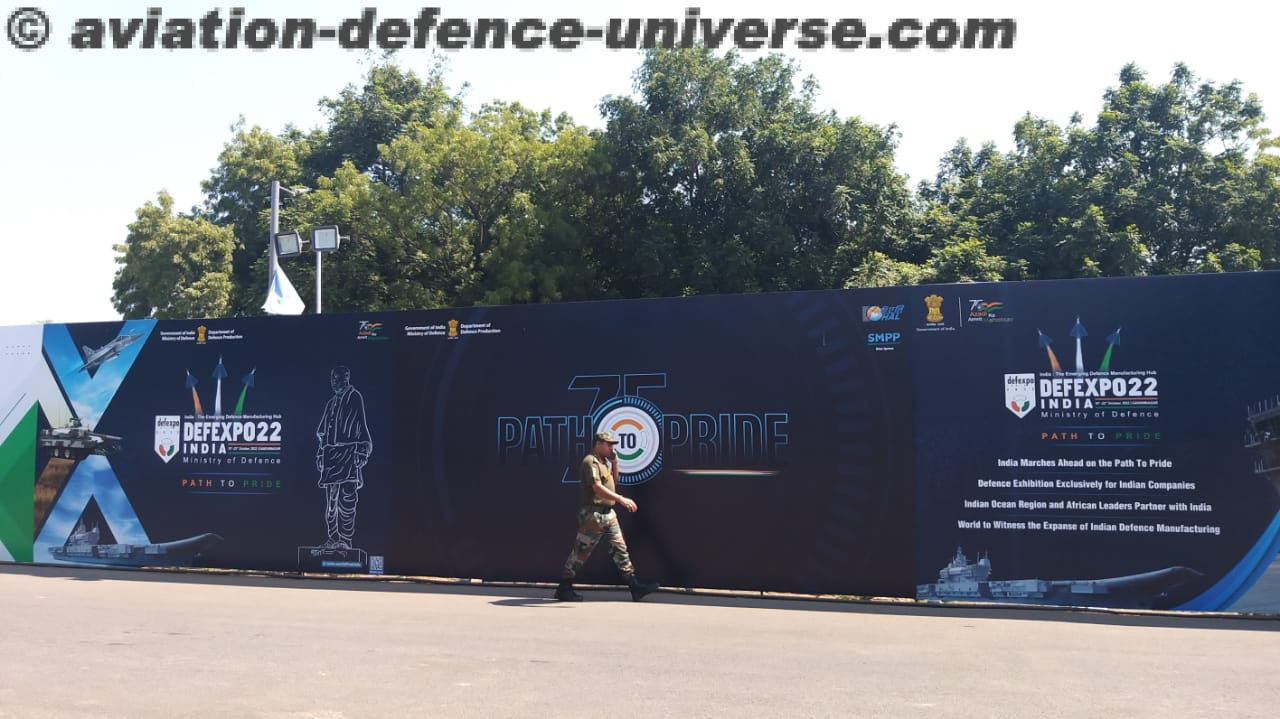 Welcome to this week’s edition of ADU’s Podcast. I am your host Sangeeta Saxena Editor Aviation & Defence Universe . I and my colleague Chaitali Bag are in Gandhinagar, Gujarat to cover the Defence Expo 2022. The countdown to the event has begun and it is less than 24 hours when the gates of Mahatma Mandir Convention and Exhibition Centre (MMCEC) will open to trade visitors , in a first ever four-venue format, which promises to engage the public and inspire them to join the Aerospace and Defence manufacturing sector; for ‘Aatmanirbharta’ in Defence which means self reliance. All roads will lead to the city of Mahatma Gandhi from 18th to 22nd October 2022.

The DefExpo 2022 was earlier scheduled from March 10-14, 2022 and was postponed due to logistical challenges being faced by participants at that stage. The new dates were announced on August 08, 2022. The forthcoming edition is the first-ever edition exclusively for Indian companies. For this edition of the show, Indian companies, Indian subsidiaries of Foreign OEMs, Division of company registered in India, Exhibitor having Joint Venture with an Indian company will be considered as Indian participants. The theme of DefExpo 2022 is ‘Path to Pride’. The clarion call by the government to transform India into a strong and self-reliant nation by supporting, showcasing and forging partnerships for the Indian Aerospace and Defence manufacturing sectors with Indian as well as global customers, the aim is to showcase the might of the domestic defence industry which is now powering ‘Make in India, Make for the World’ resolve of the Government and the nation at large.

The event promises to better its previous edition as it is being planned in the largest ever total area of 1+ Lakh sqm (previous edition being 76,000 sqm). The inaugural ceremony and seminars will be held at Mahatma Mandir Convention and Exhibition Centre (MMCEC), Exhibition at Helipad Exhibition Centre (HEC), Live Demonstrations on all five days at Sabarmati River Front (SRF) and ship visits for public by Indian Coast Guard at Porbandar. The biggest drone show by the indigenous IIT Delhi start-up Botlabs (an iDEX winner) has also been organised, which will be another highlight of the mega-event.

The sale of space had commenced from August 15, 2022 and, thus far, over 1,000+ exhibitors have registered and the numbers are anticipated to be the highest-ever recorded during the previous editions of DefExpo. In the run-up to the event, a nation-wide reach out has been undertaken inviting the States to set-up pavilions and thereby partake in nation building through enhancing indigenous defence manufacturing. Many States have assured of participation as a State pavilion. The enhanced number of State Pavilions, which is presently eight, would also provide the opportunity for Chief Ministers, Industries Ministers, Chief Secretaries etc. to solicit investment and promote their respective States thus cultivating more centres for indigenous aerospace and defence manufacturing within the country. Also, towards greater participation by start-ups and MSMEs, 50 per cent discount on space charges is offered.

The India Pavilion – a marque pavilion of Department of Defence Production, Ministry of Defence – will showcase the maturity of indigenous defence products, start-ups, latest technology, including Artificial Intelligence in defence, and will present India’s vision for 2047. It has been named ‘Path to Pride’.
DefExpo 2022 will also mark the celebration of one year of the formation of the seven new defence companies, carved out of the erstwhile Ordnance Factories. All these companies will be participating for the first time at DefExpo.

The exhibition will also host the 2nd edition of the India-Africa Defence Dialogue (IADD), with invites extended to 53 African countries. A separate Indian Ocean Region plus (IOR+) conclave with participation of approximately 40 countries is also on the anvil. Intensive interactions and ideation at seminars, planned at the DefExpo 2022 with eminent panellists from Government, Industry, Industry associations, States, Academia, Think-tanks etc., will also provide important learnings/take-aways/action points for further growth of this sector.

The Government of India, with policy initiative of ‘Make in India’ and ‘Aatmanirbhar Bharat’, believes that the country has tremendous potential to become a leading supplier of complete defence solutions to many of its friendly nations. The seminars during the event will be held at Mahatma Mandir Convention and Exhibition Centre, Gandhinagar in a hybrid format, enabling the speakers as well as the audience to participate virtually. These will be streamed worldwide. The seminars will be conducted by the leading Industry Associations, Think Tanks, Indian Defence Public Sector Entities, Service Headquarters (SHQs), Defence Research & Development Organisation (DRDO), Directorate General of Quality Assurance (DGQA), Ministry of Civil Aviation and State Government etc.

The theme of these seminars will broadly cover Exports, Financing and Investments in Defence Start-ups & MSMEs, Emerging role of MSME in Aerospace manufacturing & MRO, Aatmanirbharta in Defence R&D, Futuristic Autonomous Technologies for Air Dominance etc. Leading international and national experts from Defence and Aerospace sector are the speakers for various seminars. The details of the seminars are available on DefExpo 22 website and mobile app.

‘Invest for Defence’, the first ever marquee event of Ministry of Defence, targeted to promote investment in the defence sector in the country both by the Indian industry as well Foreign Original Equipment Manufacturers, will be inaugurated by Defence Minister of India Rajnath Singh on October 20th. The event will highlight the requirements of the Armed Forces and policy reforms undertaken by the Government for ease of doing business in the defence sector. It provides the industry with the opportunities and the advantages of investing in the sector and thus contributing to maximising the indigenous production.
The event is expected to witness participation from the big industry names, both Indian as well as foreign OEMs, such as L&T, Adani Defence, Bharat Forge, Saab, Airbus, Lockheed Martin etc., besides participation from Domestic and Foreign Institutional Investors and Venture Capitalists.

The event will feature a panel discussion between the industry stalwarts and the MoD and Armed Forces leadership. The discussion will be followed by a Q&A session, wherein participants can ask questions from the eminent panelists. The target audience for the event is industry representatives including those from MSMEs and Start-ups, policy makers and enthusiasts in defence sector.

Team ADU will get the event live to you from today when we start with the making of the show. It will be three days of coverage of events, conducting interviews , capturing the event in images and videos, releasing podcasts and eventually ensuring you all enjoy every moment of it. All this is at the click of your mouse. We will love covering it for you and are sure you will enjoy it as much. Goodbye for today from Team ADU.