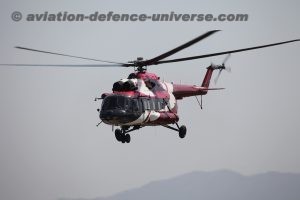 Ulan-Ude. 21 May 2018. The specialists of Ulan-Ude Aviation Plant (U-UAZ), the Russian Helicopters Holding Company (part of Rostec State Corporation), have designed the controlling equipment for the cutting-edge digital equipment of the Mi-171A2 helicopter, which is already mass-produced in the plant. The monitoring panels produced in U-UAZ are used for on-the-spot checks of the purchased components and systems in the helicopter. The experience of designing and producing such equipment may be used in the future production of the Ka-226T helicopter.

The new panels are used in testing the launching and engine control system, the auxiliary power unit, and the power supply system. In order to control these systems the helicopter developer, the Mikhail Mil Moscow Helicopter Plant (MHP), created a method of refining the one-off trial models of the helicopter. However, in mass production such approach to testing leads to a considerable increase of the fabrication cycle of the aircraft, so the MHP method has been adapted for the mass-production plant.

As the managing director of the U-UAZ JSC Leonid Belykh says, “Given the production plans of the plant, which involve state-of-the-art technical production, our task is to do our best in mastering the process of designing and manufacturing the hi-tech controlling equipment”.

The Mi-171A2 multi-purpose helicopter is one of the most expected brand new products of Russian helicopter industry, a result of a profound modernisation of the Mi-8/17 pattern helicopters. The design of Mi-171A2 has undergone more than 80 modifications. The helicopter is equipped with VK-2500PS-03 engines (the civil version of the military helicopter Mi-28 engines) with a digital control system. One of the principal differences between Mi-171A2 and the Mi-8/17 pattern helicopters lies in the new frame construction. The helicopter features a more effective X-shaped antitorque rotor and a new main rotor with all-composite blades of an improved aerodynamic configuration. Thus, due to mere aerodynamics the main rotor thrust of Mi-171A2 has increased by more than 700 kg, which had a positive impact on the whole set of the helicopter’s specifications.