Casevac of Critically Injured from Kisthwar 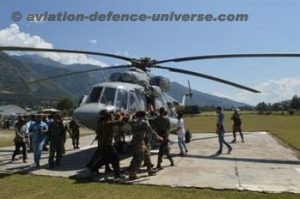 New Delhi. 14 September 2018. In the recent bus accident wherein a bus fell down in a gorge killing several people and critically injuring others near Kishtwar the Udhampur based Daring Dragons helicopter unit of Western Air Command provided yeoman service by evacuating eight critically injured persons to Jammu so that better medical care could be provided to them

The unit was tasked with the mission at 1100 hrs as requested by the District Commissioner, upon which they launched a MLH class of Heptr for the rescue. The aircraft was piloted by Squadron Leader MK Singh with Flight Lieutenant Mudit as co-pilot. Eight critically injured people were airlifted from Kishtwar to Jammu where they were admitted to the civil hospital. Along with the injured eight attendants for the injured were also airlifted.