BRICS concludes on a happier note for traditional rivals

New Delhi. 07 September 2017. It was just the ideal setting for friendly and not-so-friendly nations to meet, thrash out their differences plan their future course of action and pledge to make the world a strategically safer place for the generations to come. In the southeast of Fujian Province, Xiamen which is a hub city, a premier international seaport and a popular tourist destination on the southeast coast of China, reputed as the “Garden on the Sea”, was just the city to welcome international big-wigs and the leaders of the five nations which are the leaders of their regions. BRICS 2017 was set in these beautiful settings and hence had to be proclaimed a success as moods were happy keeping in sync with its theme of Stronger BRICS Partnership for a Brighter Future. 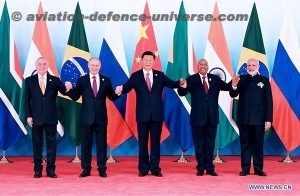 The BRICS summit 2017 concluded on Sept 5 and, amid the chaos of North Korea and Doklam, can be considered arguably successful. Various doubts had clouded the relevance of the summit or even BRICS’ effectiveness given the escalating geopolitical rivalries among India and China, unstable political and economic situations in Brazil and South Africa and the highly sensitive and varying intimacy with US and EU. But given the desperate need for economic revival, and to check on western dominance, BRICS has once again found a reason to converge on common interests.

A strong message can be taken from to the bilateral talks with India which showed that China is ready to make amends on its part if required. India’s part, coincidentally, comprised of the bilateral talks with each of the member countries too where the aim was to strengthen relations with others while making a fresh start with China-post-Doklam. The effort was so much that even the mention of D-word was avoided by the foreign Secretaries of both sides. This was a necessary step for both sides’ cooperation. Still, for India, the true diplomatic success was the joint declaration by BRICS of the terror groups in Pakistan namely Lashkar-e-Taiba, Jaish-e-Mohammad and the Haqqani network.

This was the first time when not just other BRICS countries but also China acknowledged the role of Pakistan and is a crucial step towards checking Pakistan’s role. The second part of India’s interests consisted of the economic invitations which were strongly advertised by Modi since day-one of the summit. GST and high FDI in India were some advancements that were hard selled by PM Modi while topics such as energy, tourism and other common goals were reserved for the bilateral talks. Overall the summit can be considered successful as India’s diplomacy, stress on global governance reforms and pitch for FDI was clearly heard.

Following the previous years, the event was held in the new “BRICS Plus” format, with Egypt, Mexico, Thailand, Guinea and Tajikistan also taking part in the summit. The emerging-market bloc had more global attention this time, thanks to the Doklam standoff, but looking at it now it seems the summit managed to achieve quite a lot- both in terms of political and economic aspects. While the major focus of the bloc has always been the economic cooperation, this time the summit’s headlines were not just limited to that as the bloc aimed at higher levels of cooperation and extended influence.

We surely cannot move any further without addressing China- the elephant in the room. Not just because of its friction with India but also because hosting the event, but because it was the highest beneficiary of the deals and pacts made. Obviously, being the host, china had both the duty and the opportunity to address and attend to every diplomat, thereby using the opportunity, China inked deals centred strictly around the ambitious OBOR project and increasing its influence around the world. China also banked upon the 26% increased trade it had with the BRICS countries and took the opportunity to cement the OBOR stance. The aim of Xiamen summit was to establish itself as the leader of the emerging world and it seems it has successfully accomplished that.

Regarding the countries invited to this year’s BRICS summit within the outreach format, there was a positive wave of inclusion and acceptance from the BRICS leaders. Russia was among the ones ahead in this vibe and signed various agreements on the sidelines of the summit. In Putin’s own words, “As you may know, we have doubled the purchase of natural rubber and increased the purchase of vegetables and fruit by 30–40 percent. We are interested in supplying our products, including high technology ones, to Thailand’s markets”. Russia also batted for the direct interest of its oil and energy companies with Mexico and China.

Lukoil, for instance, is going to implement four projects in the Gulf of Mexico, three of them with French partners, and one on its own while on the sidelines, Rosneft, and Chinese energy investor CEFC inked an agreement for joint energy exploration in Siberia. While the Russian activity was clearly visible in the outreached nations, Putin also warmed up to his BRICS counterparts with bilateral talks with India, China and South Africa. Russia signed the agreement on joint work on information security with the African Nation and both nations vowed to cooperate in a consolidated fashion in international organisations.

While Russia’s participation was not limited to economic but also political and diplomatic involvement, having just been out of a struggling economic and political chaos, Brazil and South Africa’s focus was mainly centred around the bilateral talks and improving economic ties with the member nations. In addition to that, South Africa’s engagement also involved citing its previous endeavours regarding the bloc. South Africa, for long, has positioned itself as the gateway to Africa and this time the aim was to continue with that policy. SA president Jacob Zuma stressed how the BRICS in Africa is reconfiguring geopolitics, while BRICS seeks to achieve greater autonomy from the west.

The trade deals inked by SA had largely been with the OBOR initiative, continuing the deep ties it has with China – SA’s largest Trading partner for almost a decade. On Monday (4.09.17), Xi said Beijing will work with Pretoria on the OBOR. South Africa is among the 69 countries and organisations that have signed up for the project, Brazil is currently negotiating the opening of a branch of the NDB in São Paulo or Rio de Janeiro and trade links between Asia, Africa, Europe and beyond. During the China-SA bilateral talks Xi and Zuma said that their relationship was “at its best in history.” and “China intends to work with South Africa to implement the Belt and Road Initiative and the outcomes of the Johannesburg summit of the Forum on China-Africa Cooperation (FOCAC), and to deepen cooperation in an all-round way and advance bilateral relations to a new level,” Xi told Zuma.

While, SA warmed up to China, Brazil had reserved its trade deals for the Indians. The South American Nation discussed the extension of the Preferential Trade Agreement (PTA) between Mercosur and India. In force since June 2009, the PTA aims to increase exports and imports between the countries of the group and Asian nations. The talks aimed at the extension of the current 450 tariff lines to around 2,000 new lines for each country.

A meeting is scheduled for 2017 to follow up on the negotiations for the extension of the PTA. We should note that Brazil is the main foreign destination for India’s investments in Oil and Gas, totalling US$ 4.7Bn – A fact stressed upon by the Indian PM. President Temer also stressed on the negotiations in opening of a branch of the NDB in São Paulo or Rio de Janeiro and it has already reached the advanced stage of negotiations.

The 4 Major agreements signed by the BRICS nations were:

4. Memorandum of Understanding between the BRICS Business Council and the New Development Bank on Strategic Cooperation

Cognizant of the profound changes the world is undergoing and the global security challenges and threats faced by the international community,the most important was the commitment to enhance communication and cooperation in international fora on issues concerning international peace and security. BRICS leaders reiterated their commitment to safeguarding world peace and security and to upholding the basic norms of the international law, and the purposes and principles of the Charter of the United Nations including sovereign equality and non-interference in other countries’ internal affairs. One hopes these will be remembered and followed up once all the leaders are back in their nations and immersed in solving domestic problems, which are in plenty for each one of them.