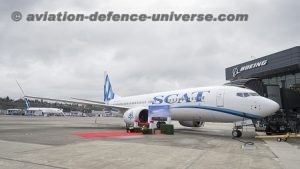 Seattle. 29 March 2018 . Boeing delivered the first 737 Max  to SCAT Airlines.  The airlines has long operated the fuel-efficient and reliable Boeing Next-Generation 737. With the new 737 MAX, SCAT will be able to achieve a further double-digit improvement in fuel efficiency and environmental performance. And SCAT will be the first in Central Asia to fly the MAX.

“Last year SCAT celebrated its 20th anniversary and it is very symbolic that we are entering a year of adulthood with a purchase of the newest aircraft models. We are confident that the acquisition of Boeing 737 MAX 8 jets will not only raise the level of customer service in our airline, but will also give a new momentum to the development of the aviation industry in Kazakhstan”, said Vladimir Denisov, president of SCAT Airlines.

“Today marks another significant milestone in our long-term partnership with SCAT Airlines. We are proud to have supported their growth and we look forward to the 737 MAX taking the airline to new heights,” said Marty Bentrott, Sales vice president for Middle East, Turkey, Russia, Central Asia & Africa.

Established in 1997, SCAT Airlines, based in Shymkent, is one of the leading carriers of Kazakhstan. SCAT operates an extensive network of domestic services as well as international destinations in the Commonwealth of Independent States and Central Asia. The airline has 12 Boeing airplanes in its fleet including 737, 757 and 767 models.