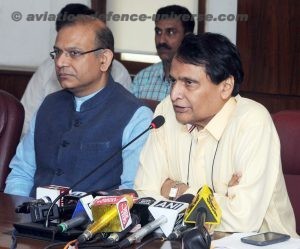 Suresh Prabhu said, DigiYatra will provide a pan-India powerful platform for future, adding that Airports will have the possibility of providing innovative services and consent based  targeted services in future. “Any service provider involved in facilitating travel of passenger from door to door will be able to use this platform in future through innovative solutions” he said. The Minister asserted that the ultimate beneficiary will be the passengers, who will have all the travel related options available to them.

Elaborating on the contours of Digi Yatra, Minister of State of Civil Aviation, Jayant Sinha said, it is a Facial Recognition based passenger processing which  is a common standard being adopted the world over. To provide a seamless experience right from the entry to the airport upto boarding the aircraft, Shri Sinha said, DigiYatra will have a centralised registration system for passengers. “Under the Digi Yatra, passenger can get a Digi Yatra ID by sharing minimum details like Name, e-mail ID, Mobile number and details of one approved Identity proof where Aadhar ID is not mandatory. This DigiYatra ID will be shared by passengers while Booking ticket. Airlines will share the passenger data and DigiYatraID with the departure airport”, he said.

Shri Jayant Sinha said, Digi Yatra will bring benefits to passengers and all stakeholders involved in the process, as Airport operator will have travel information in advance for better resource planning and the real-time data of passengers within the terminal will enable the operator to take proactive action to avoid congestion.

The Secretary, MoCA, Rajiv Nayan Choubey further elaborated on Digi Yatra mechanism saying that a successfully registered passenger can go directly to the entry point  E-Gate of the airport and scan the barcode/ QR code of the ticket/ Boarding pass. “A camera will capture the face for comparing with DigiYatraID Photo. On successful verification of the  travel details and facial matching, the E-Gate  will open. The system will also generate a token in the system combining the face of passenger with PNR of the ticket, so that at subsequent check points the ticket details will be available on face recognition.”

He explained that airlines will have the information of its passenger and their status within the terminal. No more missing passenger causing departure delays. Security will benefit from the ability of the technology to verify the passenger at every checkpoint in a non intrusive way except that physical frisking of the passenger as per security procedures will continue. Intentional Boarding pass exchange by passenger or wrong boarding by mistake will not happen.

As Indian Aviation is witnessing an unprecedented passenger growth for the past 50 months and it is likely to continue, this would mean the existing airports have to handle more passengers for considerable time before additional infrastructure is created. “The passengers are expecting better facilitation at the airport and Security remains a key concern in air travel. Leveraging technology is the only solution to meet such challenging requirements”,  Choubey said.

Pointing out that multiple stakeholders are involved in a seamless travel process for a passenger, he emphasised that it was important that the stakeholders work in a connected environment for reaping the benefits of technology. He said, in order to achieve this objective, the Ministry of Civil Aviation evolved the concept of “DigiYatra” which  envisages a connected ecosystem enhancing the seamless travel experience for the passengers and simultaneously improving the security.