Bhutan gets a new government: Democracy marches ahead 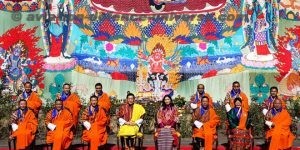 New Delhi. 09 November 2018. It has been three days since Bhutan got a new Prime Minister and the new government of the mountain nation was sworn in. And all its neighbours are viewing this change in Bhutan with a keen eye.

Druk Nyamrup Tshogpa (DNT) won the election and has a great task on the strategic front to maintain – keeping both China and India in good huour. And this feeling will be vice versa for these neighbours too. Both have as a rule though unwritten always been trying to woo Bhutan.

Lyonpo Sherub Gyelthen joins as the new Minister for the Ministry of Home and Cultural Affairs. His Majesty the King conferred Dakyen to him who was former Secretary for the Dzongkha Development Commission.

Wangchuk Namgyel from the ruling party DNT was elected as the Speaker by the National Assembly on 31 October as the Members of Parliament voted along party lines. Wangchuk Namgyel, 55, from Wangdue’s Nyishog-Saephu constituency secured 30 votes, exactly the number of seats DNT commands in the 47-member House. He beat Druk Phuensum Tshogpa (DPT) candidate Ugyen Wangdi, from Drametsi-Ngatshang constituency in Mongar who secured 17 votes.

Thirty-four-year-old Tshencho Wangdi, also from DNT, from Kabisa-Talog constituency in Punakha secured 31 votes to be elected the Deputy Speaker.

Delhi has been watching the elections in Bhutan very keenly Within hours of the final results being announced, Prime Minister Narendra Modi called up Dr. Lotay Tshering. “I was honoured to receive a call from the Indian Prime Minister this afternoon. He said that the Indian foreign secretary will soon visit Thimphu and also invited me to visit India… I am looking forward to the visit,” Lotay told the media.

India and Bhutan share traditionally warm and friendly relationship which is relatively trouble free when compared with other South Asian neighbours of India. And India has always been keen to keep it that way. A cordial and protective relationship.

The year 2018 celebrates the Golden Jubilee of the establishment of formal diplomatic relations between India and Bhutan. Marking the completion of 50 years, Bhutan opened a Consulate in India’s north-eastern city of Guwahati last month. The two countries also launched a special logo in New Delhi to celebrate their enduring partnership. A series of special commemorative initiatives, cultural activities, exhibitions and seminars will continue to take place throughout the year.

Bhutan has been central to India’s two major policies – the ‘Neighborhood First Policy’ and the ‘Act-East Policy’. After coming into power, Narendra Modi’s government has laid special emphasis on India’s neighborhood as well as its relations with Bhutan, which have mostly been tension free. Bhutan’s strategic location has helped India in flushing out militants in the North-East, playing a significant role.