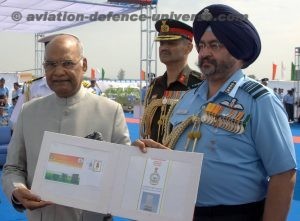 The President’s Standard and Colours are the highest honour bestowed on units of the armed forces in recognition of their invaluable contribution to the security of the nation during peace and hostilities. Apart from being the highest possible recognition to a unit coming from the Supreme Commander, they commemorate the hard work and contribution by the personnel of the unit, past and present, to keep the unit flag flying high. The motivation that they provide to the younger generation in keeping the high standards set by their predecessors ensures that the IAF’s ethos of professionalism and service to the nation remain prime and unremitting.

The President was presented the National Salute at the commencement of an impressive parade. The parade was followed by a mesmerizing performance by the Air Force Air Warriors Drill Team. The Air Warrior Drill Team is the first of its kind amongst all military and Para Military Forces in India, with their unique synchronized drill movements with rifles carrying live bayonets. Thereafter, the fighter might of the Indian Air Force was displayed in a scintillating aerial display, with enthralling formation aerobatics by the Surya Kiran Aerobatic Team and a heart stopping low level aerobatics display by Sukhoi-30 fighter jet.

The President conveyed his happiness in bestowing the esteemed honour to these Air Force units. In his address, he recalled the glorious legacy of the Indian Armed Forces in protecting the unity, integrity and sovereignty of the country.