An obituary : Rest in Peace Antonov AN 225 Mriya 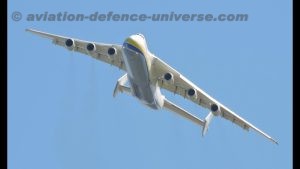 New Delhi. 04 March 2022.  As the war between Russia-Ukraine continues, as  aviation enthusiasts and  aerospace journalists it was heart wrenching farewell we gave to the aircraft we have always loved and been in awe of. As the one and only AN-225 Mriya was burning and pictures were all over the internet , there was still a ray of hope till an official statement by the Ukrainian State Concern Ukroboronprom confirmed its destruction.

World’s biggest cargo  airplane was under repair and routine maintenance at the ANTONOV Company site in Gostomel. According to the director of Antonov Airlines, one of the engines was dismantled for repairs and the plane wasn’t able to take off that day, although the appropriate commands were given. Currently it is impossible to assess the plane’s condition and the possibility and cost of its restoring due the lack of access to the aircraft as the control over the airport is taken over. But the look at the pictures give a dismal thought that this cannot get restored.

The Antonov An-225 was designed to airlift the Energia rocket’s boosters and the Buran-class orbiters for the Soviet space program. It was developed as a replacement for the Myasishchev VM-T. The An-225’s original mission and objectives are almost identical to that of the United States’ Shuttle Carrier Aircraft. The lead designer of the An-225 (and the An-124) was Viktor Tolmachev. A second An-225 was partially built during the late 1980s for the Soviet space program. Following the collapse of the Soviet Union in 1991 and the cancellation of the Buran program, the lone operational An-225 was placed in storage in 1994. The six Ivchenko-Progress engines were removed for use on An-124s, and the second uncompleted An-225 airframe was also stored. In the 1990s, a cargoliner bigger than the An-124 was clearly needed. The first An-225 was restored by 2001.

By 2000, the need for additional An-225 capacity had become apparent, so the decision was made in September 2006 to complete the second An-225. That second airframe was scheduled for completion around 2008 but was subject to delays. By August 2009, the aircraft had not been completed and work had been abandoned. 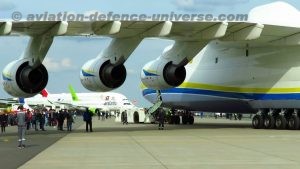 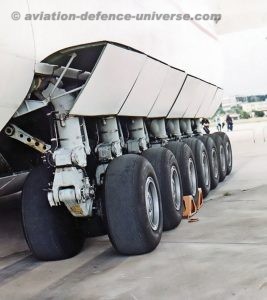 Under Antonov Airlines, the An-225 received its type certificate from the Interstate Aviation Committee Aviation Register (IAC AR) on 23 May 2001. The type’s first flight in commercial service departed from Stuttgart, Germany, on 3 January 2002, and flew to Thumrait, Oman, with 216,000 prepared meals for American military personnel based in the region. This vast number of ready meals was transported on 375 pallets and weighed 187.5 tons. The An-225 was later contracted by the Canadian and U.S. governments to transport military supplies to the Middle East in support of coalition forces. An example of the cost of shipping cargo by An-225 was over 2 kr. million (about €266,000) for flying a chimney duct from Billund, Denmark, to Kazakhstan in 2004.

Antonov Airlines ceased cooperation with AirFoyle and partnered with Volga-Dnepr in 2006. This in turn led to the An-225’s current blue and yellow paint scheme which was added in 2009. When the COVID-19 pandemic impacted the world in early-2020, the An-225 participated in the relief effort by conducting flights to deliver medical supplies from China to other parts of the world. 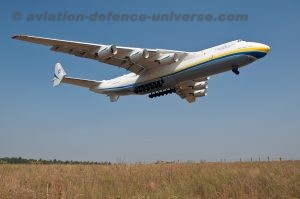 “Russian occupiers destroyed the flagship of Ukrainian aviation — the legendary An-225 “Mriya”. This happened at the Antonov airfield in Gostomel near Kyiv, where the plane was. It will cost over 3 bln USD to restore the plane, the restoration shall be time consuming. Mriya will definitely be reborn. The restoration is estimated to take over 3 bln USD and over 5 years. Our task is to ensure that these costs are covered by the Russian Federation, which has caused intentional damage to Ukraine’s aviation and the air cargo sector. Russia has destroyed our “Mriya” ( laterally translated as “lathe “dream”), but the dream of Ukraine to get free from the occupier cannot be destroyed. We will fight for our land and our home until we win. And after the victory, we will definitely finish our new “Mriya”, which has been waiting for this in a safe place for many years. Everything will be Ukraine!” Yuriy Husyev said, General Director of Ukroboronprom in an official statement. The pain of loosing its best and most important aircraft is evident in the statement. The aviation world will always miss the big wonder. Editor ADU Sangeeta Saxena had the privilege of seeing it and clicking pictures of it at the ILA Berlin Airshow in 2018. AN-225 has gone into the pages of aviation history and the world will remember it fondly. 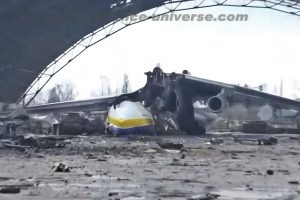