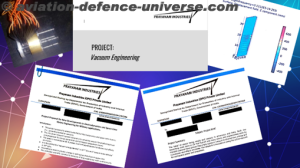 Pune. 02 November 2022. Prayanam Industries (OPC) Private Limited, a DPIIT-recognised start-up in the race with the US and China on breakthrough propulsion technology research, which will work by manipulating and engineering the fabric of space-time by using the fundamental laws of physics. According to the company’s briefing document, the vacuum is of enormous energy and produces real effects on matter. From the perspective of quantum theory, the vacuum is the seat of energetic particles and field fluctuations. Whereas from the General Relativity point of view, the vacuum is the seat of the spacetime fabric which is responsible for the distribution of matter and energy. The focus of research is to use this active vacuum to produce propulsive force, a kind of propellantless propulsion. The document also briefly reviews the research efforts of the US which have been underway for the last 40 to 50 years and the recent patents assigned to the US Navy make the picture clear. The project started one and a half years ago. The company is planning to move on to the experimental work.

The bizarre patents assigned to the US Navy in 2017 speak of similar radical technologies. These radical technologies according to the Chief Technology Officer of the US Naval Aviation Enterprise, Dr James Sheehy, in a sworn statement appealed for the legitimacy of such beyond-next-generation aerospace technology and assured the patent examiner in charge that such aircraft propulsion method described in the patent will become reality in future. He also stated the Naval Air Warfare Center Aircraft Division has already started experimentation. He finally states that China is significantly working in this area and the US would not want China to hold the intellectual rights to such advanced technology.

Prayanam Industries is a defence start-up actively working with Indian Air Force and Hindustan Aeronautics Limited on various indigenisation projects. The company recently has company its first project for Indian Air Force. The company have also recently received the project sanction order under the Make II category from the HAL for the design and development of pressure sensors.