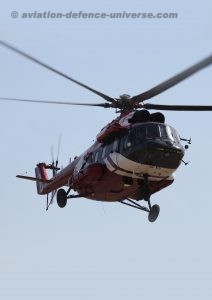 Moscow. 18 May 2018. The first production helicopter Mi-171A2 has taken a test flight at the Ulan-Ude Aviation Plant owned by the Russian Helicopters Holding Company (part of Rostec). The first multirole Mi-171A2 will be delivered to UTair-Helicopter Services for experimental operation in polar regions.

Mi-171A2 has become the first Russian helicopter created with the use of advanced digital technologies and put into production. The partial transition to electronic design documentation allowed the company to cut time and resources needed for work preparation. Parts making on numerical control machines with the use of mathematical models has cut the process time and guaranteed the accuracy of manufacturing and saving of materials.

“It’s not just an upgraded helicopter. It’s a brand new machine, with advanced digital technologies on board and entirely different performance characteristics. I’m sure that this development is going to find the broad demand on both domestic and foreign markets – the helicopter is a full-fledged competitor of world-class counterparts in the most popular segment of multirole machines. Potential buyers first of all include the countries using its predecessors – Mi-8/17. Now we are negotiating the certification of Mi-171A2 in Latin America. Some interest is also being taken by Asian, African, former Soviet Union countries,” said Rostec CEO Sergey Chemezov.

There are about 80 modifications in the Mi-171A2 design. The helicopter is equipped with the VK-2500PS-03 engines with the digital control system. The helicopter has a more effective X-type antitorque rotor and a new main rotor with all-composite blades with the improved airfoil shape. Thus, due to aerodynamics alone, the thrust of the Mi-171A2 main rotor increased by more than 700 kg, which had a positive impact on the helicopter’s performance. 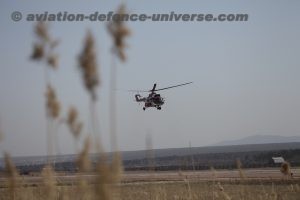 With a view to guarantee the safe operation of Mi-171A2 in the future, it is planned to organize training of flight engineers working for Russian and foreign operators. The certified training center of the Ulan-Ude Aviation Plant is now creating the respective resource base – visual aids, stands, posters, models. In prospect, it is planned to commission a Mi-171A2 simulator on partially movable platform for training of flight personnel.

Cruise and maximum speed indicators of Mi-171A2 have increased by 10% relating to production helicopters Mi-8/17. The helicopter may be effectively used around the clock, in highland conditions, at low and high temperatures, high humidity and overwater.

The digital avionics set KBO-17 (“glass cabin”), including the navigation instrumentation and the system of general helicopter equipment with display data indication, allowed the company to reduce the crew to only two people. The cabin ergonomics have also changed due to redistribution of flight engineer functions to commander and co-pilot. Video cameras have increased the flight safety by improving the vision of external environment, including rear and lower hemispheres.

In August 2017, the helicopter was certified by the Federal Air Transport Agency of the Russian Federation according to Category A providing for meeting the most stringent requirements to flight safety specified for civilian helicopters.

JSC Ulan-Ude Aviation Plant is one of the manufacturing facilities owned by the Russian Helicopters Holding Company. The current industrial and technological potential of the plant allows arranging the production of new types of aircraft swiftly and combining prototype construction with mass production. Over the course of 75 years in operation, more than 8,000 aircraft have been built on this Plant. Today the plant specializes in manufacturing Mi-8AMT (Mi-171E), Mi-171, and Mi-8AMTSh (Mi-171Sh) helicopters.

JSC Russian Helicopters (part of Rostec State Corporation) is one of the world leaders in helicopter industry, the only developer and manufacturer of helicopters in Russia. The holding company was established in 2007. The head office is located in Moscow. The holding company is comprised of five helicopter plants, two design bureaus, enterprises for production and maintenance of components, aircraft repair plants and a service company providing after-sales support in Russia and abroad. The buyers of the holding company’s products include the Russian Ministry of Defense, the Ministry of Internal Affairs, EMERCOM of Russia, and other state customers, Gazprom Avia and UTair airlines, as well as major Russian and foreign companies. In 2016 the revenue of Russian Helicopters under IFRS amounted to RUB 214.3 billion, and 189 helicopters were supplied.

State Corporation Rostec is a Russian corporation founded in 2007 for the purpose of promoting the development, production and export of hi-tech civilian and military industry products. The Corporation comprises over 700 organizations that are currently part of eleven holding companies operating in the military-industrial complex and three holding companies working in civilian industry, as well as 80 directly managed organizations. Rostec’s portfolio includes well-known brands such as AVTOVAZ, KAMAZ, Concern Kalashnikov, Russian Helicopters, VSMPO AVISMA, UralVagonZavod, etc. Rostec companies are located in 60 constituent entities of the Russian Federation and supply products to the markets of more than 70 countries. In 2016, the consolidated revenue of Rostec reached 1 trillion 266 billion rubles, while the consolidated net income and EBITDA amounted to 88 and 268 billion rubles respectively. In 2016, the average salary in the Corporation was 44,000 rubles. According to Rostec’s strategy, the main objective of the Corporation is to ensure that Russia has a technological advantage in highly competitive global markets. Rostec’s key objectives include the introduction of a new techno-economic paradigm and digitalization of Russian economy.