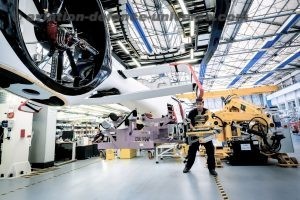 Marignane. 13 JULY 2018.  The first pre-serial H160 has been fitted with its rear fuselage, the first major component assembly having been pre-assembled in Albacete, Spain according to the site specialisation strategy implemented in Airbus Helicopters.

As the process gains in maturity, assembly lead-times will decrease to reach the target assembly time of forty days at the full production rate.