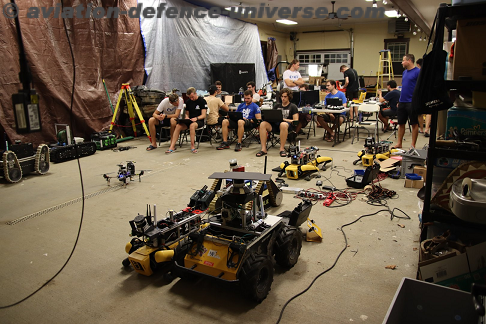 Prague. 20 October 2022. The Faculty of Electrical Engineering of the Czech Technical Univerity in Prague (FEL – CTU) has long been ranked among the ten most important research institutions in the Czech Republic. According to the methodology used by FEL in recent years, the faculty has consistently generated around one third of the scientific output of CTU.

We have a dominant share in the excellent results of CTU, and we have been trendsetters in many areas of technical development. Faculty staff have been developing extensive scientific cooperation with colleagues from the world’s best universities and research institutes. We work on research and innovation projects for our industrial partners and for the state and public sectors, especially for health, security and military institutions. We also work on numerous international and domestic grant-funded basic and applied research projects.

At the fair we will present the following technologies:

The autonomous control system for the purposes of exploration is a breakthrough technology. Cutting-edge research is carried out in the Laboratory of Computational Robotics of the Center of Artificial Intelligence of the Department of Computers of FEL – ČVUT. Multi-robot platforms are able to explore terrains completely autonomously, without the intervention of an operator, even under difficult conditions of reduced visibility, and to locate objects of interest.

The SPOT four-legged walking robot, the Lily and SCARAB II six-legged walking robots and the MARV band robot are robotic platforms capable of autonomously exploring inaccessible terrains, including underground spaces and caves where no GPS signal is available. An assembly of FEL – CTU multi-robot systems participated successfully in last year’s finals of the DARPA Subterranean Challenge, an unofficial Robot Olympiad organized by a U.S. government agency.

This device makes subjective measurements of voice transmission quality with a parallel psychomotor role. Like the exhibits that follow, this technology is developed by experts from FEL CTU’s Department of Measurement.

The shooting range uses modified contemporary weapons of the armies of the Czech Republic and NATO to generate a parallel psychomotor role in tests of the intelligibility of transmitted speech in accordance with the recommendation of ETSI TR 103 503.

A simulator of special telecommunication networks with low-bit codexes

The simulator of a (radio)telephone network tests elements of real networks with subjective and objective tests (P.800, P.805, P.863, and others). The simulator supports state-of-the-art coders (EVS, MELPe) and allows exhibition participants to demonstrate connections between terminals with variable route parameters.

An acoustic azimuth and elevation detector for incoming fire

This is a demonstrator of a device for combat vehicles. The device acoustically determines the direction of incoming fire and identifies the caliber of the weapon from which it was fired. Identification algorithms use elements of AI and achieve identification accuracy of over 88% for widely-used present-day weapons. The combined uncertainty of the azimuth and elevation measurements is below 3 angular degrees.

A device for searching for jammers of GPS, Galileo and similar systems, for use in the field and at mobile checkpoints.

An unobtrusive column detector, fully replacing classical frame metal detectors in places where the use of a frame is unsuitable/impossible.

Presentation within the Medical Conference section
Doc. Miroslav Bureš from the Department of Computers of FEL – CTU will make a presentation within the Medical Conference on sensor networks and the monitoring of vital functions in military medicine.
The technology of sensor networks is becoming well available, and has a number of promising applications in both military and civilian medicine. Monitoring the vital functions of soldiers can be useful in care of the wounded in combat, in the subsequent treatment of wounded soldiers, and in clinical studies. The presentation introduces the concept of medical sensor networks, and also shows how they have been used in three recent experimental projects in military and civilian medicine in which the University of Defence, the Czech Technical University in Prague and other partners have been cooperating.