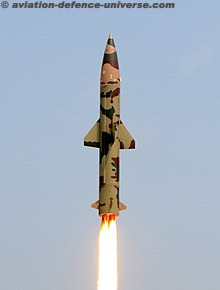 New Delhi. 10 January 2023. A successful training launch of a Short-Range Ballistic Missile, Prithvi-II was carried out on January 10, 2023 from the Integrated Test Range, Chandipur off the coast of Odisha. A well-established system, Prithvi-II missile, has been an integral part of India’s nuclear deterrence. The missile struck its target with high accuracy. The user training launch successfully validated all operational and technical parameters of the missile.

Prithvi II class is also a single-stage liquid-fueled missile having a maximum warhead mounting capability of 500 kg, but with an extended range of 250 km (160 mi). It was developed with the Indian Air Force being the primary user. It was first test-fired on 27 January 1996 and the development stages were completed in 2004. This variant has been inducted into the army as well. In a test, the missile was launched with an extended range of 350 km (220 mi) and had improved navigation due to an inertial navigation system. The missile features measures to deceive anti-ballistic missiles.

The missile was inducted into India’s Strategic Forces Command in 2003, and it was the first missile developed under the Integrated Guided Missile Development Programme. After a failed test on 24 September 2010, two more missiles aimed at two different targets were launched on 22 December 2010 and were successful. According to news sources the range is now increased to 350 km (220 mi) and the payload capacity now ranges between 500 – 1000 kg. On June 2, India successfully test-fired its indigenous nuclear-capable Prithvi-II missile. The launch happened at the Integrated Test Range at Chandipur in Odisha at 9:50am. The missile, capable of carrying payloads of up to 1,000 kg, was inducted into the armed forces in 2003. It is the first to be developed by the Defence Research and Development Organization under its Integrated Guided Missile Development Programme.

India’s Strategic Forces Command test launched two short-range nuclear capable ballistic missiles at night as part of its annual training cycle to test the combat readiness of the Indian Army’s missile forces. Two Prithvi-II tactical surface-to-surface short-range ballistic missiles were test fired from the Integrated Test Range (ITR) on Dr. Abdul Kalam Island in the Bay of Bengal off the coast of Odisha at nighttime on November 20. The missile launches took place between 7 p.m. and 7:15 p.m., according to government sources cited in local media reports. The trial of the surface-to-surface missile with a strike range of 350 km was carried out from a mobile launcher from launch complex-3 of the ITR at 7:05 pm, sources told India Today TV, adding it was a routine trial.