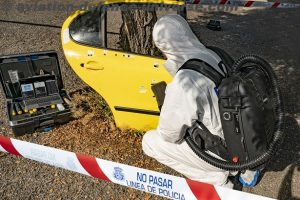 Madrid. 26 October 2022. Spain’s National Police Force and leading global technology engineering company Indra presented a new method of chemical analysis that greatly simplifies and speeds up ballistics investigation through the use of the revolutionary iForenLIBS system. The decision at the end of the 2010s to restrict the use of lead in ammunition for environmental and public health reasons made ballistics analysis much more complex. Investigations by police forces around the world were hindered by a new obstacle.

The Spanish Police Force and Indra introduced the new procedure in a scientific study presented to acknowledged leaders in the field globally, who came together at ENFSI’s Annual Ballistics and Firearms Congress in Lisbon.

The study investigated the problem posed by Sintox and Nontox-type cartridges. Each manufacturer has its own fulminant formulation, replacing lead with other more common elements considered non-toxic, like potassium, sodium and silicon. This makes chemical analysis much harder and more resource-intensive.

Using Indra’s iForenLIBS system, Spain’s National Police has found a new way of determining the distance from which a shot was fired by analyzing a common element: the microscopic copper residues from the brass of the cartridges. This dispenses with the need for other more complex techniques; even items of clothing covered in biological matter can be analyzed.

That has been made possible by the investigative work of the Police to resolve a large number of cases and by the extraordinary sensitivity of Indra’s iForenLIBS system, which is capable of rapidly analyzing particles of any chemical element measuring as little as one micron – one thousandth of a millimeter.

Using Laser Induced Breakdown Spectroscopy (LIBS) techniques, the system can also help to determine the angle of entry and trajectory of a bullet by analyzing the debris around an entry hole. It is as if capabilities that until now could only be found in a big laboratory have been now transported to the scene of the crime. It is now straightforward to analyze many pieces of evidence and preliminary results can be available at the scene, helping an investigation to make progress from the very beginning.