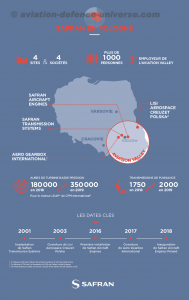 Sędziszów Małopolski, Poland. 04 July  2018. The new Safran Aircraft Engines Poland plant was inaugurated today by Safran Chief Executive Officer Philippe Petitcolin, in a ceremony attended by Adam Hamryszczak, Polish Vice Minister for Investment and Development, Pierre Levy, French Ambassador in Poland and Olivier Andriès, CEO of Safran Aircraft Engines.
This new facility will make low-pressure turbine blades for the LEAP turbofan engine from CFM International, the 50/50 joint company between GE and Safran Aircraft Engines. Safran invested some 48 million euros in this new 8,000 square meter (86,400 sq ft) plant, outfitted with machinery and equipment to keep pace with the very high production rate targets.
The plant in located in Sędziszów Małopolski, southeast Poland, in the heart of Aviation Valley, the country’s center of aeronautical expertise. It already has more than 200 employees, with almost 150 operators fully trained in precision mechanics. The new plant delivered its first parts in July 2017, and has set an objective of turning out 180,000 low-pressure turbine blades this year, rising to 350,000 in 2019 and 800,000 a year towards 2022. Safran’s investment in this new plant once again reflects its determination to develop top-flight industrial capabilities to support the unprecedented ramp-up of the LEAP engine.

CFM International plans to deliver some 1,100 engines this year, then reach an annual rate of 2,000 starting in about 2020. “I’m delighted to inaugurate our new facility in Poland, which will further cement the industrial bonds we have formed with the country over more than fifteen years,” said Philippe Petitcolin, Chief Executive Officer of Safran. “The Polish aviation industry calls on a highly skilled labor force, underpinning its strong growth and making it a major player in Europe. Safran is contributing to this growth by taking an active role in various specialized training programs and by making substantial local investments, thus creating a number of jobs,” he added.

Safran set up its first plant in Poland in 2001, Safran Transmission Systems Poland. Over the years, Safran has invested more than 180 million euros in industrial facilities in the country and now has over 1,000 local employees, making it the third leading employer in Aviation Valley. With more than 15,000 orders and commitments to date, the LEAP is the fastest-selling engine in the history of aviation. CFM International’s new-generation turbofan has seen a very successful entry into service, as it passed the mark of one million flight-hours less than two years after starting commercial service. More than 350 airplanes powered by LEAP-1A and LEAP-1B engines are now deployed by over 50 operators from around the world.
Share this on WhatsApp