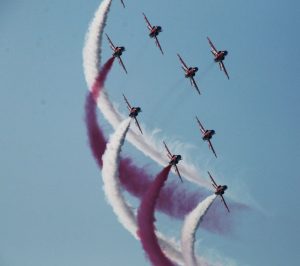 Oman. 20 November. All eyes on the Al Quram Beach were looking up in the sky as the Royal Air Force Red Arrow team dazzeled everyone with their breath catching aerobatics.

The Red Arrows are on their  biggest overseas tour in a decade with more than 20 displays and a series of flypasts being  performed across the Asia-Pacific and Middle East regions by the Royal Air Force Aerobatic Team. 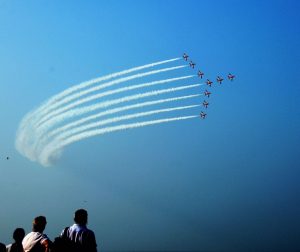 Since 1965, and by the end of the 2015 season, the Red Arrows had flown 4,725 displays in 56 countries worldwide.The display seen by millions of people every summer is the result of nearly eight months’ intensive training each year.The majority of this practice is completed during the winter months at RAF Scampton, Lincolnshire. Training allows the pilots to perfect their three different types of display, which are flown depending on the weather conditions of a show location. 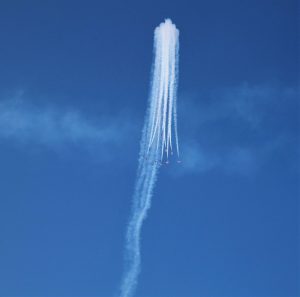 It was in 1964 when the Royal Air Force amalgamated its display teams into one, premier unit – the Red Arrows. The name was taken from the Black Arrows team and the colour scheme as a tribute to the Red Pelicans, while the aircraft chosen to be flown, the Gnat, had been used by the Yellowjacks. Queen meets the team at Rissington

In the first season of 1965, the team – flying seven aircraft in a display and based at RAF Fairford – performed 65 shows. A media event at RAF Little Rissington on May 6 was the team’s first official display, with the first public performance in the UK on May 15 at Biggin Hill Air Fair. The team permanently increased to nine display aircraft in 1968 and the Diamond Nine became the Red Arrows’ trademark formation.

The Gnat, which had flown 1,292 displays, was replaced by the BAE Systems Hawk, a modified version of the RAF’s fast jet and weapons trainer, for the 1980 season. Also that year, permission was given for the team to have the motto Eclat – meaning excellence. 1966 Gnats in formation

RAF Scampton – the station famous for its role in the 1943 Dambusters raid – became the team’s new home in 1983, moving from RAF Kemble – its base since 1966. Apart from a period at RAF College Cranwell between 1995 and 2000, the Lincolnshire station has been the Red Arrows’ permanent home ever since. 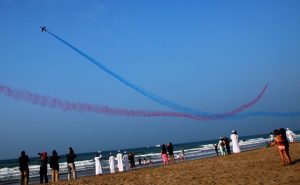 The 4,500th Red Arrows display took place at the RAF Waddington International Air Show in July 2013 – in the team’s 49th season and the year concluded with a highly-successful tour of the Middle East.

In 2014, the 50th display season was marked as a major milestone with a series of celebrations throughout the year. The Red Arrows were the main feature and theme of the year’s airshows. There were also television and radio documentaries, magazines produced and even a high speed train named after the team. tailfinstory2

A special, one-off, tailfin was revealed on the team to recognise the anniversary season, with the design incorporating both a Gnat and Hawk jet outline to reflect the two types of aircraft flown by the team in its history.

For the 2015 season, instead of returning to the traditional three-stripe tailfin livery used since the 1960s, a fresh new paint scheme was revealed on the jets during a live television broadcast from RAF Scampton. This Union flag-inspired design features flowing red, white and blue lines and emphasises the Red Arrows’ role as national ambassadors for the United Kingdom.