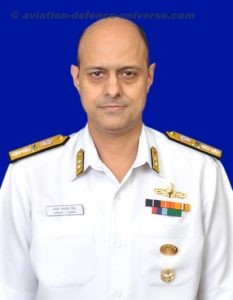 New Delhi. 02 February 2018. Rear Admiral Sanjay Jasjit Singh, NM has been appointed as the Flag Officer Sea Training, at Kochi. He was commissioned in 1986, in the Executive Branch of the Indian Navy. A graduate of the National Defence Academy, Pune, where he was adjudged the Best Naval Cadet, he was also awarded the Binoculars for Best Sea Cadet andSword of Honour for the Best Midshipman during subsequent naval training. He specialised in Navigation and Direction, in 1992, where he stood first in the course. He attended the Advanced Command and Staff Course at UK, in 2000, where he was adjudged the Best Overseas Student amongst 90 participating Armed Forces from 50 countries. He has undergone the Naval Higher Command Course at Naval War College, Mumbai, in 2009, and the National Security Strategy Course at the National Defence College, Delhi, in 2012.
He has held a range of command, training and staff appointments, and has served on most classes of ships of the Indian Navy, over the past 30 years. His sea command appointments include command of the ASW and UAV-control Frigate INS Taragiri, where he was awarded the Nao Sena Medal, and the multi-role Frigate INS Trishul. His training appointments include Officer-in-Charge of the Warship Work Up Team at Mumbai, and the Navigation Direction School at Kochi. His staff appointments include Indian Naval Attaché at Iran, and the Joint Director of Personnel, Principal Director of Naval Operations, Principal Director Strategy, Concepts and Transformation, and the Assistant Chief of Naval Staff (Communications, Space and Network Centric Operations) at Naval Headquarters.
He was the lead drafter for the Indian Navy’s Maritime Doctrine, 2009; Strategic Guidance to Transformation, 2015, and theIndian Maritime Security Strategy, 2015. A keen student of military affairs, he has completed several post-graduate study programmes, including MSc and MPhil in Defence and Strategic Studies from Madras University; MA in Defence Studies from Kings College, London; MA (History), MPhil (Pol) and PhD (Arts) from Mumbai University.
Share this on WhatsApp