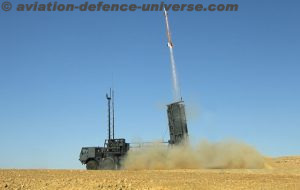 Tel-a-Viv. 04 January 2023. The introduction of this feature is the product of RAFAEL’s Counter-TBM SPYDER program, which involved researching and analyzing the lessons learned from recent and ongoing armed conflicts involving extensive use of tactical ballistic missiles. The program has brought about a practical upgrade to the SPYDER system which is equipped for implementation. In response to urgent operational requests from several existing customers throughout the world, the program will extend the capabilities of the SPYDER’s effectors as well as the implementation of various Counter-TBM derivatives across the system.

Executive Vice President and General Manager Air & Missile Defense Systems Division Brig. Gen. (Res.) Pinhas Yungman: “RAFAEL is a world-leading expert in the field of missile defense, as evidenced by our top-notch products, such as DAVID’S SLING and IRON DOME. We are proud to announce that our international sales leader – SPYDER – has been reinforced with a tactical ballistic missile defense capability. This extremely important Counter-TBM feature will be offered as an option in the SPYDER’s toolbox. Under the SPYDER’s tailor-made solution paradigm this capability will be offered as a cost-effective option to our valuable customers with respective urgent operational needs.”