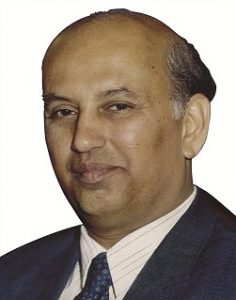 New Delhi. 05 October 2016. Prof U R Rao, former Chairman, ISRO and Secretary, Department of Space, was inducted into the prestigious “The 2016 IAF Hall of Fame” by the International Astronautical Federation (IAF) during the closing ceremony of the International Astronautical Congress 2016 held at Guadlajara, Mexico on September 30, 2016 attended by distinguished guests consisting of Space Scientists, Industry leaders, Administrators and Professionals.

Prof. Rao’s citation read out at the time of induction is as follows: “Prof. U.R. Rao is hereby inducted into THE 2016 IAF HALL OF FAME for his outstanding contributions to development of space technology in India and for his relentless efforts towards sharing the greater benefits of space technology with developing countries and the world at large ……”.

Prof U R Rao, Chairman, Governing Council of the Physical Research Laboratory, Ahmedabad, is an internationally renowned space scientist who has contributed to the development of space technology in India and its extensive application to communications and remote sensing of natural resources since starting his career in 1960. Prof. Rao is responsible for the creation of India’s space and satellite capabilities and their application to the nation’s development.

Prof. Rao undertook the responsibility for the establishment of satellite technology in India in 1972. Under his guidance, beginning with the first Indian satellite ‘Aryabhata’ in 1975, over 20 satellites were designed, fabricated and launched. Prof Rao also accelerated the development of rocket technology in India, resulting in the successful launch of ASLV rocket in 1992 and the operational PSLV launch vehicle. He has tirelessly promoted the use of space technology for broadcasting, education, meteorology, remote sensing and disaster warning. Prof Rao, who has published over 360 scientific and technical papers in various journals, has received many honours and awards, including the Padma Bhushan Award, a very prominent civilian award of the Government of India. Earlier in 2013, Prof U R Rao was inducted into the Satellite Hall of Fame, Washington by the “Society of Satellite Professionals International”.