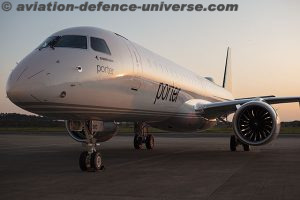 East Hartford, Connecticut. 21 December 2022 . Pratt & Whitney  announced that Porter Airlines has taken delivery of its first Embraer E195-E2 aircraft, which is powered exclusively by GTF engines. This is the first of 30 aircraft selected in 2021, with an additional 20 selected in 2022. Combined with 50 purchase rights, the airline has committed to up to 100 E195-E2 aircraft. Porter Airlines is the launch customer for the Embraer E195-E2 in North America.

“These GTF-powered E195-E2 aircraft will deliver operational and environmental value that let us reach more customers, with an even better travel experience,” said Michael Deluce, president and CEO for Porter Airlines. “We’ve already announced our first routes with these aircraft, which will fly from Toronto Pearson to Montréal, Ottawa Vancouver, Edmonton, Calgary and Halifax. This is the beginning of a North American expansion that will see us serve destinations throughout the continent.”

The Pratt & Whitney GTF™ engine is the only geared propulsion system delivering industry-leading sustainability benefits and dependable, world-class operating costs. It is the exclusive powerplant of the Embraer E-Jets E2 family, which reduces fuel consumption and CO2 emissions up to 25% per seat, NOx emissions by up to 50% and noise footprint by up to 75%.* Certified for operation on 50% sustainable aviation fuel (SAF) and successfully tested on 100% SAF, GTF engines are capable of further reductions in carbon emissions, which will help the aviation industry meet its goal of net zero emissions by 2050. The engine’s revolutionary geared fan architecture is the foundation for more sustainable aviation technologies in the decades ahead. Learn more at pwgtf.com.

*Reductions vs. prior generation aircraft, based on 75 dB noise contour and ICAO CAEP/6 emissions regulations.