Police to increase its awareness of cyber warfare 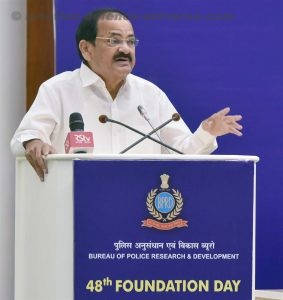 New Delhi. 27 August 2018. The Vice President of India, M. Venkaiah Naidu has said that the era of New Age cyber warfare, and the new enemy can be combated only through the power of knowledge. He was addressing the gathering on the occasion of 48th Foundation Day of Bureau of Police Research and Development (BPR&D), here today. The Minister of State for Home Affairs, Kiren Rijiju and other dignitaries were present on the occasion.

The Vice President cautioned against the cyber attacks by hackers working over the Internet thousands of miles away and asked police to be equipped to handle attacks that jeopardize national security. He further asked the BPR&D to evolve best practices, policies and procedures in policing to combat emerging new age National Security threats.

He said that Indian Government has taken various measures to prevent cyber attacks and stressed on the need to augment police response capacities. He further said that the set up for combating the new enemy in Cyber Space can no longer be housed within the walls of a seemingly secure single government agency. 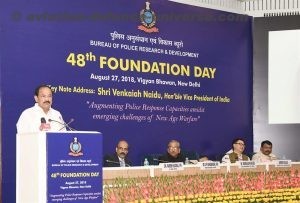 He added that the Government & private sector must establish joint mechanisms to protect the police against the future challenges, including, the threats of modern warfare. All police forces of the country have to equip themselves with the cyber forensic techniques and knowledge to counter a cyber-attack or investigate a cyber-crime, he added.

In his address Kiren Rijiju stressed upon the Modernization of Police Forces programme. He recalled that the Prime Minister Narendra Modi, in his first address to the All India Conference of Director Generals/Inspector Generals of Police on November 30, 2014 in Guwahati, had rolled out the five point concept of SMART policing (Strict but also Sensitive, Modern and Mobility, Alert and Accountable, Reliable and Responsive, Techno savvy and Trained). Rijiju said in order to have a complete SMART Policing system, the Police Organizations will have to play an important role. 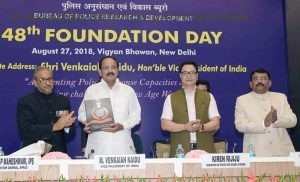 Pointing out that in line with recommendations made by the 14th Finance Commission, the Modernization of Police Forces (MPF) programme stood transferred to the States, Rijiju urged the States to give priority to the MPF scheme. He lamented the MPF programme suffered since not much attention is being paid by many States to the modernization of the State Police Forces and conditions needed improvement in certain States. Stating that policing has to be effective and being closest to the people at large, Rijiju said no matter how much you contribute, people will expect more.

Addressing the gathering, Director General, BPR&D, Dr. AP Maheshwari said that the BPR&D is working on framing Standard Operating Procedures (SOPs) for drones (UAVs) and setting a benchmark and determining Policing Standards in the country. He said the first National Conference of Station House Officers (SHOs) of all Police Stations in the country will be held soon. 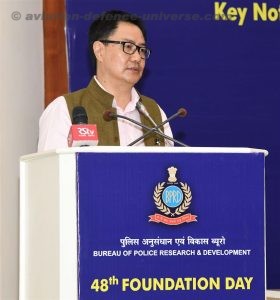 On the occasion, the Vice President released a Coffee Table Book and Video CD on the BPR&D. Senior Officers of MHA, BPR&D, Police Forces and CPOs were present during the function.