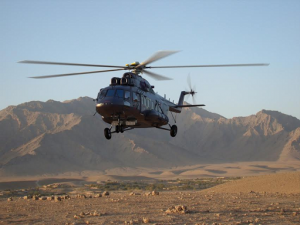 Under the terms of the contract, the helicopter will be transferred to the customer which is the Government of Punjab Province, in the second quarter of 2017. The helicopter will be made in the convertible version that will allow you to use it both as a transport flight vehicle and as a VIP cabin configuration able to take aboard 13 passengers accompanied by a flight attendant. In its transport configuration, Mi-171E can carry up to 27 passengers in the jump seats and up to 4 tons of cargo inside the cargo cabin or on external sling.

“Good flight characteristics of the Russian helicopters combined with high reliability, simplicity of service and effectiveness in a wide range of temperatures, modes and altitudes ensure their popularity around the world. Positive reputation of Russian Helicopters holding company as a reliable supplier of helicopters have contributed to the signing of the contract with the Punjab province government,” said Deputy CEO for Marketing and Business Development of the Russian Helicopters holding company Alexander Shcherbinin.

It is expected that the Punjab province leadership will use the multipurpose Mi-171E helicopters for passenger and freight transportation, air ambulance tasks, patrolling and remedial actions in emergency situations. The scope of possible applications of the helicopter is further expanded through the installation of a set of search-and-rescue equipment – LPG-150 winch and TSL-1600 searchlight. Increased flight safety is ensured due to the installation of Enhanced Ground Proximity Warning Module.

In January 2017, Russian Helicopters holding company became the winner of the international tender and signed a contract with the government of Balochistan province (Republic of Pakistan) for the supply of Mi-171 civilian helicopters.