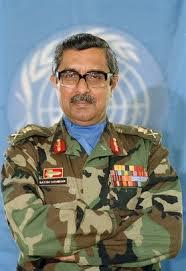 New Delhi. 07 October 2016. “At the risk of raising my blood pressure and body temperature while in the process of convalescence from a bad bout of viral, I cannot but voice my utter dismay at some of the reports that I have read today expressing doubts about the statement made by the Director General of Military Operations on the strikes carried out by the Indian Army Special Forces detachments on Pakistani terrorists last week.

As someone who served with great pride in Indian Army uniform for almost 40 years, I have absolutely no hesitation in stating that I find this absolutely despicable. I served, among many other places, in the early 1960s in the Uri sector where the terrorist took place a fortnight back. I saw action in the Sialkot Sector in 1965 War. In the 1971 War for the liberation of Bangladesh (was a recipient of the Vir Chakra). Much later, in 1991-92, when the Indian establishment was dealing with the volatile situation in Jammu and Kashmir, the Khalistani actions in the Punjab, the emerging ULFA movement in Assam (Operation Bajrang), and the winding down of the operations in Sri Lanka (Operation Pawan), among many other on-going commitments, I had the honour and privilege of holding the appointment of the DGMO at Indian Army Headquarters. While holding that appointment I had obviously dealt quite closely with the Pakistani establishment, including in leading two defence delegations for talks with Pakistani counterparts (in April 1991 in New Delhi and then in September 1991 in Islamabad). Hence I state what I do with some sense of knowledge and conviction.

I cannot believe that the DGMO would stand in front of the national and international media to make a statement that was false in content and intended to delude the Indian people. I think he rightly gave out as much detail that was necessary and no more. Any evaluation of the damage caused to the Pakistani terrorist infra-structure and casualties may well be speculative, even if based on video recordings of the operation. And while on the subject of recordings of the strikes, I would like to state without any equivocation whatsoever, that none of it should be put out in the public domain at all; certainly not for some time to come. The lives of our gallant soldiers who carried out the operation must not be placed at risk, nor should the scope and manner of conduct of such future operations (of which I have no doubt there will be many more), be compromised.

Those who wish to be provided with proof may be invited to jump into the Jhelum. And in so far as Pakistan is concerned, surely we cannot be guided by their propaganda machine. My compliments to the Government of the day for giving the Indian Army the clearance for the conduct of the operation (coincidentally, pretty close date-wise to the great decision taken by then Prime Minister Lal Bahadur Shastri fifty one years ago). Congratulations to my colleagues in uniform at various levels for the planning and preparation, and most particularly to those who executed the operations so magnificently. Well done!”

Lt Gen Satish Nambiar(Retd) of the Indian Army was the first Force Commander and Head of Mission of UNPROFOR, the United Nations Protection Force. This is an open letter by him. He can be contacted at [email protected].