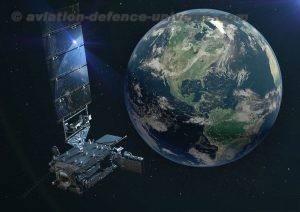 The Geostationary Operational Environmental Satellite (GOES) – R Series is managed by the U.S. National Oceanic and Atmospheric Administration (NOAA). GOES-S, the second satellite in the series, launched from Cape Canaveral, Florida, on March 1 and was renamed GOES-17 upon reaching geostationary orbit. The first satellite in the series, GOES-16, launched from Cape Canaveral in November 2016 and is operational as NOAA’s GOES East.

“Our Scalable SIRU provides the top performance and stabilization needed for the highest quality images and is well-suited for commercial satellite applications,” said Dean Ebert, vice president, navigation and positioning systems, Northrop Grumman Mission Systems. “We are committed to offering customers a variety of options to meet their specific mission needs through our versatile Scalable SIRU family of products.”

GOES-17, orbiting 22,300 miles above Earth, will be positioned to boost forecast accuracy for the West Coast, Alaska and Hawaii once operational. Together, GOES-16 and GOES-17 will observe most of the Western Hemisphere. GOES-17 scans the skies five times faster than previous GOES spacecraft with four times greater image resolution, according to NOAA. It will provide high-resolution, rapid-refresh satellite imagery as often as every 30 seconds. GOES-17 data will help improve the prediction and warnings of severe weather, potentially saving lives. Additionally, GOES-17 will improve aviation forecasts and flight route planning to avoid hazardous conditions such as turbulence.