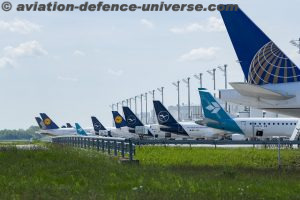 Munich. 07 July 2022. The dynamic upward trend at Munich Airport is reflected in the traffic figures for the first half of 2022: With around 13 million passengers, the entire annual volume for 2021 has already been exceeded in the first six months. Passenger numbers increased more than fivefold compared to the first six months of the previous year. The steep upward trend can be seen when comparing the two quarters: After only around four million passengers in the first quarter of 2022, more than twice as many passengers were handled in the second quarter at around nine million. In June, Munich Airport already reached three-quarters of its volume from the same month of the record year 2019 again. The seat load factor in Munich in June was at a record level of 84%.

Airlines responded to the high demand for flights by significantly expanding their flight capacity from Munich: Whereas only around 40,000 aircraft movements were registered in the first half of 2021, there were over 129,000 take-offs and landings in the first six months of this year – more than three times as many. In addition, considerably more destinations are now available to passengers in Munich again: Whereas last year around 100 destinations worldwide could be reached from Munich, this summer there will be up to 200 destinations. Freight business at the airport also benefited from the increasing air traffic in Munich, with the total freight volume doubling year-on-year to around 127,000 metric tons.

Further, a review and summary of all major developments in 2021 is now available in Munich Airport’s integrated report with the title “New Times. New Horizons.”.
“New times. New horizons.” presents an integrated, transparent picture of the business activity and illustrates all the economic, environmental and social aspects of the airport’s operations in the past year. One section looks at “Strategy 2030,” providing details of the targets that Munich Airport intends to achieve in the next few years.
The online version of “New Times. New Horizons.” can now be downloaded at report2021.munich-airport.com.