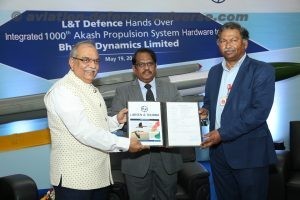 Integrated Propulsion Airframe System hardware is a critical system of the Akash missile. It comprises Sustainer & Booster motors (Section IV & V) integrated with 112 other sub-assemblies and components. L&T Defence partnered DRDL for production technology & process development for Akash propulsion motors and produced prototype and limited series production of both the Sustainer & Booster motors creating an ecosystem of medium and small-scale enterprises. The propulsion system hardware is manufactured and integrated at L&T’s state of the art facility at Coimbatore. L&T partnered DRDO in the development and productionisation of the Ground Mobile Launchers and Rohini Radar Systems that form part of the Akash Systems inducted by Indian Air Force as well as Indian Army.

Speaking on the occasion, Mr. Jayant Patil said, “We have been associated with the Akash missile program right from the development stage since 1987. As a Development partner and Production agency we are proud of our contribution towards the evolution of the Akash Missile System. As a long-term development partner to DRDO, we have been following “ONE TEAM” approach with DRDL as well as BDL to speed up the industrialization phase of the Akash program.   These joint efforts have been primarily instrumental in progressing the Akash Program from the development to Series Production phase in a seamless manner.”

On receiving the 1,000th Akash Propulsion system hardware, Mr V. Udaya Bhaskar said, “Our partnership with L&T for the Akash Program is an exemplary example of Public-Private partnership. L&T has played a key role in enabling serial production of this critical missile system through innovation and use of advanced manufacturing technology.”

Dr. S Christopher, said “Association of Competent Industrial Partners as L&T in the early stages of the Program’s development cycle is a key success factor in propelling Akash Weapon System induction by the Users through accelerated industrialization phase. Akash is a contemporary Weapon System that has been inducted into the Indian Air Force & Army and has generated interest amongst nations across the world. I urge the industries to take the lead in exporting the system. Akash is one of the torch bearers of the “Design in India & Make in India” concept of the Government of India.”