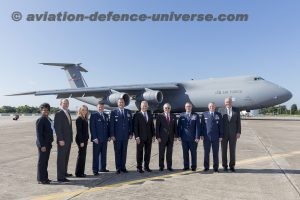 Bethesda. 28 JUNE 2018. Lockheed Martin Aeronautics Company celebrated the 50th anniversary of the C-5 Galaxy strategic transport at the company’s Marietta, Georgia, facility. Georgia Gov. Nathan Deal served as the principal speaker for the event, which was attended by Lockheed Martin employees, elected officials and representatives from the U.S. Air Force.

The C-5 Galaxy strategic transport has been operated solely by the U.S. Air Force since 1970. All production C-5s were built at Lockheed Martin’s Marietta site. The first C-5A rolled out of the Marietta facility on March 2, 1968, at a ceremony with U.S. President Lyndon Johnson in attendance. The first C-5 made its initial flight on June 30, 1968.

The final RERP C-5 served as the backdrop for today’s ceremony and it will be delivered to the 439th Airlift Wing, the Air Force Reserve Command unit at Westover Air Reserve Base, Massachusetts, in the coming weeks. C-5Ms are also based at Dover Air Force Base, Delaware; Travis Air Force Base, California; and Joint Base San Antonio-Lackland, Texas.