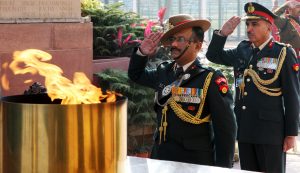 The General Officer was commissioned into the Garhwal Rifles in June 1979. During career spanning over 38 years, he has served in all operational theatres and has participated in many active combat leadership roles at every stage of command.

The early operational service of the General includes the command of Company in the Kargil Sector of Ladakh and in active operations during Operation PAWAN as part of the IPKF in Sri Lanka.  He commanded battalion in Operation RHINO and Operation FALCON, an Infantry Brigade in the deserts and a Counter Insurgency Force deployed in the Kashmir Valley and thereafter commanded a strategically important 4 Corps.

He has also held a number of important staff as well as instructional appointments during his career. The General Officer has served at the United Nations Mission in Somalia (UNOSOM-II).

The General Officer in his capacity as Vice Chief will head the General Staff Branch at the Army Headquarters and will provide crucial support to the Army Chief in discharge of his duties. He will be responsible for ensuring the operational effectiveness of the Army by directly overseeing the functioning of the military operations, intelligence and logistics directorates. He will coordinate and facilitate decision making on critical issues involving multiple stakeholders within and outside Army.