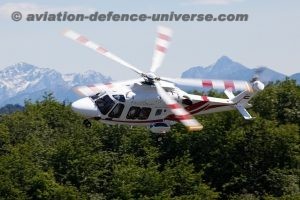 Dubai, 11 November 2017. Leonardo will present its comprehensive capabilities in the aerospace, defence and security sectors with a range of solutions on static display and illustrated with dedicated briefings. The Middle East is a strategic market for Leonardo, and countries in the region are looking for long-term partners.The UAE Al Fursan aerobatic team’s MB-339 jet trainers flying during the exhibition and the range of locally operated helicopters visible at the show are a few examples of the established leading roles the company plays in the region.

For the first time in the region, a full scale cabin mockup of the AW609 TiltRotor, configured for search and rescue, and the new fighter attack version of the M-346 jet trainer are on display. The AW609 combines the vertical take-off and landing and hovering capabilities of a helicopter with the speed, range and altitude of a turbo-prop. It has been selected by the UAE’s Joint Aviation Command for search and rescue missions. The new M-346 Fighter Attack, equipped with a variant of the Grifo multi-mode fire control radar, designed and manufactured by Leonardo, is a further evolution of a family concept designed to create a common baseline, able to answer different air forces requirements in short timescales. In the rotorcraft sector the company will also be exhibiting the latest generation AW169 and the AWHERO state-of-the-art rotary-winged unmanned systems.

Leonardo’s presence in the regional helicopter market is significant with over 230 of the company’s new generation civil and military AgustaWestland aircraft having been ordered by various Middle Eastern customers to date, with the company providing comprehensive support services and training packages locally. In addition to the established legacy of AW109 aircraft and the best-selling AW139 type, the new generation AW189 and AW169 models have further expanded the regional success of the Company in support of Oil & Gas industry and for VVIP duties. Approximately 90% of the VVIP rotorcraft fleet of UAE, for example, is made of Leonardo helicopters. Leonardo is also exhibiting the M-345 trainer, as part of its offer for the training sector. The M-345 has the same low acquisition and operational costs of a turbo-prop trainer, and provides pilots with a more authentic experience because of its jet aircraft performance. In the fixed-wing sector, the recent contract to supply the Eurofighter Typhoon to Kuwait represents the largest order ever taken by the company and adds to the Eurofighter success in Saudi Arabia and Oman. Relevant for the region also the C-27J, an aircraft designed to respond to harsh requirements from the most demanding air forces. The aircraft can be equipped with specialized sensors and systems becoming the MC-27J variant as special mission workhorse with capabilities well beyond standard transport aircraft, while suited to meet the needs of partner countries in the Middle East.

A wide array of remotely piloted air systems, avionics systems and sensors will also be illustrated during the show, including a full-scale model of the company’s Falco EVO unmanned air system featuring the Gabbiano ultra-light radar and the SAGE electronic support measure. Also on show will be the newly-launched Mirach 40 target drone, the company’s second generation AESA surveillance radar, Osprey, the Miysis DIRCM (Directed Infrared Countermeasure) and the Britecloud expendable active decoy in its 55m and 218 formats. Finally, the company’s Mode-5 IFF M426 interrogator, the Type 163 laser target designator, and an LED Search and Landing Light will be on display, alongside the company’s interactive airborne ISTAR display. Regionally, Leonardo has also provided integrated naval systems for combat management, naval radars, fire control systems, missile electronics, and military radios and it is currently pursuing new opportunities for both land and naval sectors.

Cyber security and Space are new areas of focus in the UAE. In Space, Leonardo provides technologies for Earth Observation programmes such as KhalifaSat, in collaboration with the Mohammed-bin-Rashid Space Centre in Dubai and Falcon Eye (through the joint venture Thales Alenia Space – Thales 67%, Leonardo 33%) as well as satellite services through Telespazio (Leonardo 67%, Thales 33%). Telespazio, which has a major role in the European Galileo satellite navigation system, recently signed an agreement with UAE Space Company Yahsat, which will see the two companies cooperate in the fields of satellite navigation, telecommunications and geoinformation.

Finally, Leonardo offers its advanced knowledge in the management of new challenges related to cyber security and the protection of major events. Here, the company’s goal is to become a strategic partner that can create value through successful collaborations, building on its proven track record as a global provider in innovative technology. Earlier this year Leonardo and Abu Dhabibased IGG (International Golden Group PJSC) signed a strategic collaboration agreement to supply cyber security capabilities in the UAE. Leonardo and IGG will collaborate to identify and implement advanced solutions including Security Operations Centres (SOCs).