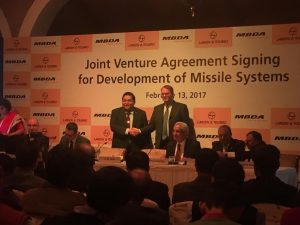 New Delhi, February 13, 2017.  In recognition of the path-breaking initiatives of the Government of India to target indigenisation of the Defence Sector under the Make in India initiative, Larsen & Toubro (L&T), India’s multinational engineering conglomerate and private sector defence major, and MBDA, a world leader in missile systems, have set up a joint venture (JV) to develop and supply missiles and missile systems to meet the growing potential requirements of the Indian armed forces.

The Joint Venture Company, named ‘L&T MBDA Missile Systems Ltd’, will operate from a dedicated work centre, which will include pyrotechnical integration and final checkout facilities. It is expected to be incorporated in the first half of 2017 after necessary approvals.

L&T will own 51% of the Company and MBDA, 49%, fully complying with India’s Foreign Direct Investment

(FDI) policy norms. The JV will be registered in India and conduct business as an Indian Company, subject to Indian laws.  The JV would focus on business opportunities in the Missiles and Missile Systems domain and target prospects under the Buy (Indian – IDDM), Buy (Indian) and Buy & Make (Indian) categories of Defence Procurement.

The decision to formalise this partnership, a key milestone for both L&T and MBDA in their long term relationship, was made after extensive evaluation and identifying the strong synergy between the two organisations. L&T and MBDA have collaborated and partnered on co-development and production of major subsystems involving complex technologies and sophisticated weapon systems such as MICA missile launchers and airframe segments including control actuation units for Indian MoD orders.

Having developed a strong working relationship and built mutual trust, L&T and MBDA are convinced that it is the right time for the relationship to mature in to a JV, given the conducive policy environment in the defence sector in India. Both JV partners have a proven track record as trusted suppliers to the Indian Armed Forces – providing critical weapon systems and defence solutions across land, sea and air domains.

L&T has been delivering a range of launch systems, fire control systems and airframes / sub-systems for various indigenous weapon (Missile / Rockets / Torpedo) programmes as development partners and production agency to DRDO and DPSUs. By combining our manufacturing and system integration capabilities and track record with MBDA’s technological excellence, we now look forward to delivering complete Missile Systems, hitherto imported, to meet the requirements of the Indian armed forces as required under DPP 2016.

A M Naik, the Group Executive Chairman of L&T commented: “We have been trusted partners to DRDO and the Indian Navy, delivering complete weapon systems and platforms, command control and sensor systems, designed, developed and manufactured in India for over three decades. Over this period, we have worked closely with Ministry of Defence, and its different arms in jointly developing and delivering cutting-edge defence solutions”.

Antoine Bouvier, Chief Executive Officer, MBDA, said: “Our business strategy in India has always focused on forming partnerships at the deepest level, not just with the armed forces but also with Indian industry. This has seen us involved in the transfer of technology and the production of products and components with the state-owned DPSUs (Defence Public Sector Undertakings) and also with the establishment of very close partnerships with the Indian private sector including large companies and SMEs. The setting up of this JV is a natural progression of our partnership strategy. With L&T, I am convinced that we have found the ideal Indian partner”.