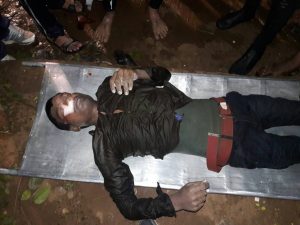 The exercise on a Tsunami scenario is being used to validate the resources available with various organizations and bring out common standard operating procedures. Vice Admiral Girish Luthra, witnessed an operational demonstration and inspected the Camp site at RT Beach, Karwar and Static Display. He will also review the results of the exercise tomorrow, 20 May 2017. 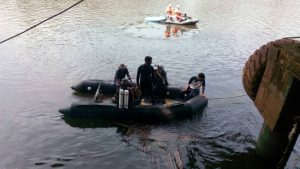 The series of actions undertaken in the operational display were structured around how relief activities are organised. In a calamity like a Tsunami, the available infrastructure is expected to be disrupted. Therefore the operational demonstration started with the aerial reconnaissance mission over land and sea conducted by a Naval Dornier Aircraft. The Aircraft also demonstrated the capability of deploying life-rafts to save people who have been washed into the sea due to a tsunami. With the information available from the Dornier mission, rescue of survivors were exercised by Chetak helicopters and boats. 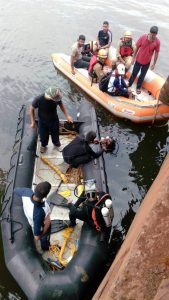 Harbours play an important role in providing relief to areas affected by disaster as road and rail networks are invariably disrupted. Moreover ships provide the highest cargo lift capability over other modes of transportation. The demonstration thus focused on how a harbor is restored. The process involves underwater survey by survey boats, clearing of underwater debris by divers and firefighting and pollution control capability by coast guard ships. Once the harbor was cleared, two ships simulated relief material being landed ashore.

The static display focused on type of relief material provided ashore by various organizations. Stalls by Army, Navy, Air Force, Armed Forces Medical Corps, National Disaster Relief Force, State and district administration, BSNL and Red Cross provided a glimpse of what to expect from other organizations to the participants of the exercise.

Vice Admiral Girish Luthra thereafter inspected the sample relief camp site. The relief camp site which was open to pubic over the last two days displayed all the facilities which will be required to provide succor and relief to the people and distribute the relief material provided from the ship. The camp was also used to validate the multi agency coordination and support work. 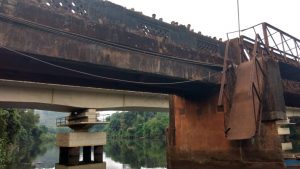 An annual Joint Humanitarian Assistance and Disaster Relief (HADR) exercise is being conducted by the Indian Navy at Karwar from 18-20 May 2017, under the aegis of the Western Naval Command.