John Glenn the first American to orbit the earth dies 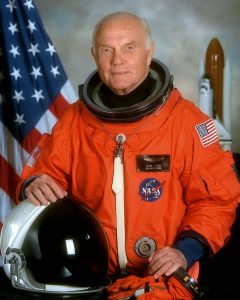 New Delhi. 09 December 2016. John Herschel Glenn Jr. (July 18, 1921 – December 8, 2016) was an American aviator, engineer, astronaut, and United States Senator from Ohio. In 1962 he became the first American to orbit the Earth, circling three times. Before joining NASA, he was a distinguished fighter pilot in both World War II and Korea, with five Distinguished Flying Crosses and eighteen clusters.

Glenn was one of the “Mercury Seven” group of military test pilots selected in 1959 by NASA to become America’s first astronauts. On February 20, 1962, he flew the Friendship 7 mission and became the first American to orbit the Earth and the fifth person in space. Glenn received the Congressional Space Medal of Honor in 1978, was inducted into the U.S.

Astronaut Hall of Fame in 1990, and was the last surviving member of the Mercury Seven. Glenn became the first American to orbit the Earth, aboard Friendship 7 on February 20, 1962, on the Mercury-Atlas 6 mission, circling the globe three times during a flight lasting nearly five hours. This made Glenn the third American in space and the fifth human being in space. For Glenn the day became the “best day of his life,” while it also renewed America’s confidence. His voyage took place while America and the Soviet Union were in the midst of the Cold War and competing in the “Space Race.” 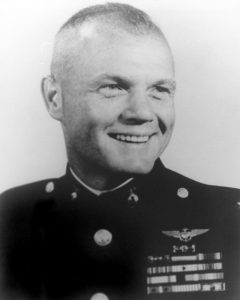 During the flight, Glenn’s heat shield had been thought to have come loose and likely to fail during re-entry, which would cause the entire space capsule to burn up. Flight controllers had Glenn modify his re-entry procedure by keeping his retrorocket pack on over the shield to help keep it in place. He made his splashdown safely, and afterwards it was determined that the indicator was faulty. Glenn’s flight and fiery splashdown was portrayed in the 1983 film The Right Stuff.

As the first American in orbit, Glenn became a national hero, met President Kennedy, and received a ticker-tape parade in New York City, reminiscent of that given for Charles Lindbergh and other great dignitaries.

Glenn’s fame and political attributes were noted by the Kennedys, and he became a personal friend of the Kennedy family. On February 23, 1962, President Kennedy escorted him in a parade to Hangar S at Cape Canaveral Air Force Station, where he awarded Glenn with the NASA Distinguished Service Medal.

In July 1962 Glenn testified before the House Space Committee in favor of excluding women from the NASA astronaut program. Although NASA had no official policy prohibiting women, in practice the requirement that astronauts had to be military test pilots excluded them entirely. 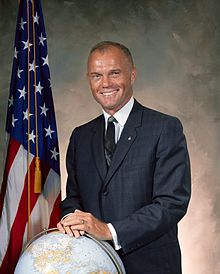 Glenn resigned from NASA on January 16, 1964, and the next day announced his candidacy as a Democrat for the U.S. Senate from his home state of Ohio. On February 26, 1964, Glenn suffered a concussion from a slip and fall against a bathtub; this led him to withdraw from the race on March 30. Glenn then went on convalescent leave from the Marine Corps until he could make a full recovery, necessary for his retirement from the Marines. He retired on January 1, 1965, as a Colonel and entered the business world as an executive for Royal Crown Cola.

After he resigned from NASA in 1964, Glenn planned to run for a U.S. Senate seat from Ohio. A member of the Democratic Party, he first won election to the Senate in 1974 where he served through January 3, 1999.

He retired from the Marine Corps in 1965, after twenty-three years in the military, with over fifteen medals and awards, including the NASA Distinguished Service Medal and the Congressional Space Medal of Honor. In 1998, while still a sitting senator, he became the oldest person to fly in space, and the only one to fly in both the Mercury and Space Shuttle programs as crew member of the Discovery space shuttle. He was also awarded the Presidential Medal of Freedom in 2012.