Moscow. 08 June 2016. On 8 June 2016, Irkut Corporation completed  the  official ceremony of rollout of the newest Russian MC-21 passenger aircraft. For the first time ever, the MC-21-300 airliner made a public appearance. This aircraft  is designated for flight tests, as scheduled. 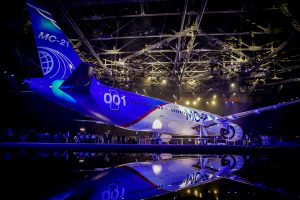 Russia’s government has spent about $3.5 billion on this development and deliveries are slated to begin in late 2018 at a list price of about $90 million per plane. The official ceremony was attended by

Dmitry Medvedev, the Prime Minister of the Russian Federation, representatives of federal and regional authorities, heads of cooperating enterprises, delegations of current and prospective MC-21 customers.

The unique assembly line, where MC-21 aircraft are currently built for flight and strength tests, was demonstrated to the Prime Minister of the Russian Federation before the rollout ceremony. Dmitry Medvedev also observed the cockpit of the first MC-21 airliner equipped with the standard avionics set. 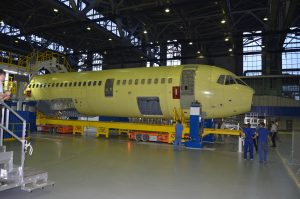 Oleg Demchenko, the President of Irkut Corporation, launched the official MC-21 rollout ceremony. He stated: “We managed to get together the team of like-minded colleagues. All program members are the leaders of domestic and world aviation industries. We work together and we believe in MC-21 aircraft being the best in its class.”

Yury Slyusar, the President of United Aircraft Corporation (UAC), emphasized that creation of MC-21 aircraft was the result of tremendous collaborative endeavour; it’s the first program, where the leading UAC enterprises (including Aviastar-SP and newly established AeroCompozit and UAC-Aggregation Center) operated under the unified plan.

Dmitry Medvedev  claimed in his address: “The creation of MC-21 aircraft is the tremendous victory of aviation industry, the victory of Irkut Corporation, our scientists, designers, our engineers, and workers.” Prime Minister of the Russian Federation also emphasized that Russia is able to create the products which both propel domestic aviation industry and compete with foreign aircraft. At the same time, Dmitry Medvedev stressed the importance of international cooperation in the project, while greeting foreign businessmen “who work in Russia, who are here in this hall, and who achieve impressive success together with us.” 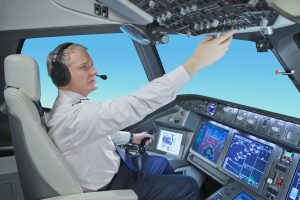 МС-21 development and production is carried out in cooperation with a broad range of international partners Thales, Honeywell , UAC, Zodiac, Eaton to name a few. The back-log counts 175 firm orders. The number of soft orders exceeds 100 aircraft. The Customers have an opportunity to choose between two engine manufacturers offering the new-generation propulsion systems. The engine design improves the fuel-burn, reduces the noise and emission levels, and minimizes the life cycle cost. Within the frame of МС-21 program, new capacities of developing and producing polymeric composite structures have been created in Russia. МС-21 aircraft offers airlines an unique opportunity to reduce airport turnaround time by 20%.  Its  ground and landing performances match 4С ICAO and III FAA and the  aircraft can be operated in all climatic regions without seasonal interruptions. 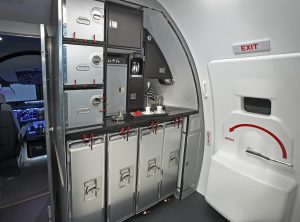 Irkut Corporation provides technical support of the supplied aircraft throughout the life cycle.The airlines will have remote access to the operation manuals. Irkut Corporation technicians will render assistance to МС-21 operators in the maintenance process optimization and operational costs reduction. Designers of Irkut Corporation Engineering Centre will develop documentation for retrofits and/or repairs.

Irkut Corporation plans to establish a multilingual 24x7x365 МС-21 Operator Support Centre. The Centre’s employees will operate multi-channel phone line and Internet portal to answer questions and process requests. The Centre will be responsible for accepting and organizing execution of requests and orders, while providing feedback. The Centre’s employees, together with IRKUT Corporation field representatives, will assist in resolution of any MC-21 operational matters by organizing interaction of aircraft operators with corporate divisions and subcontractors.

Irkut Corporation cooperates with leading leasing companies. МС-21 aircraft can be offered  on conditions of financial, operating, and wet lease. The cooperation with the Russian EXIAR ECA enables the foreign customers to raise the funds to purchase МС-21 aircraft at the minimum lending rate in accordance with the provisions of the WTO and the OECD. 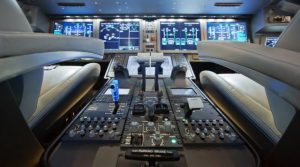