The affiliation of the Mahar Regiment of the Indian Army and 8 Squadron of the Indian Air Force was formally signed at a solemn ceremony at Air Force Station Bareilly on 19 December 2022. The Ceremony involved a Joint Army – Air Force Guard of Honour and signing of “Charter of Affiliation” by Lieutenant General C Bansi Ponnappa, Adjutant General & Colonel of the Mahar Regiment and Air Vice Marshal MS Deswal, Commodore Commandant, 8 Squadron of the Air Force. 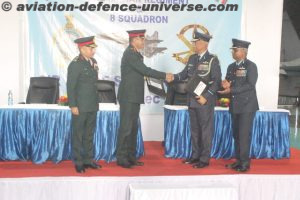 Affiliation of Mahar Regiment and the No 8 Squadron will enable each other to develop a mutual understanding of joint ethos, capabilities and core competencies through common appreciation of military tactical doctrines and concepts in the contemporary military environment.

The Mahar Regiment of Indian Army, since it’s raising on 01 October 1941 has fought with unique distinction and honour, emerging victorious on several battlefields and has been awarded nine Battle Honours and 12 Theatre Honours post-Independence. The Regiment has earned numerous gallantry awards including the Param Vir Chakra (PVC) and Ashok Chakra (AC). No 8 Squadron Air Force is one of the senior most squadrons of the Indian Air Force and was raised on 01 December 1942. The Unit has the distinction of being the first Air Force Squadron to fight in the Burma Campaign during World War II. The Squadron is presently equipped with the formidable Sukhoi-30 MKI.

This affiliation ceremony will further promote jointness and is a symbol of inter-services camaraderie that will go a long way in synergised execution of integrated operations in modern warfare.