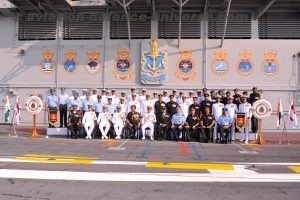 The ‘raison d’etre’ of affiliation between units of fighting forces is to act as a force multiplier by promoting better understanding of each other’s strengths and ultimately serves to maximise the combat potential of the Indian Armed Forces at the time of reckoning. It also fosters a deep understanding of each other’s service ethos, customs, traditions and sharing of new operational concepts and the same is aptly described in the affiliation motto ‘Victory through Jointness’.

The ceremony was held on board INS Vikramaditya in the Karwar Naval Base.