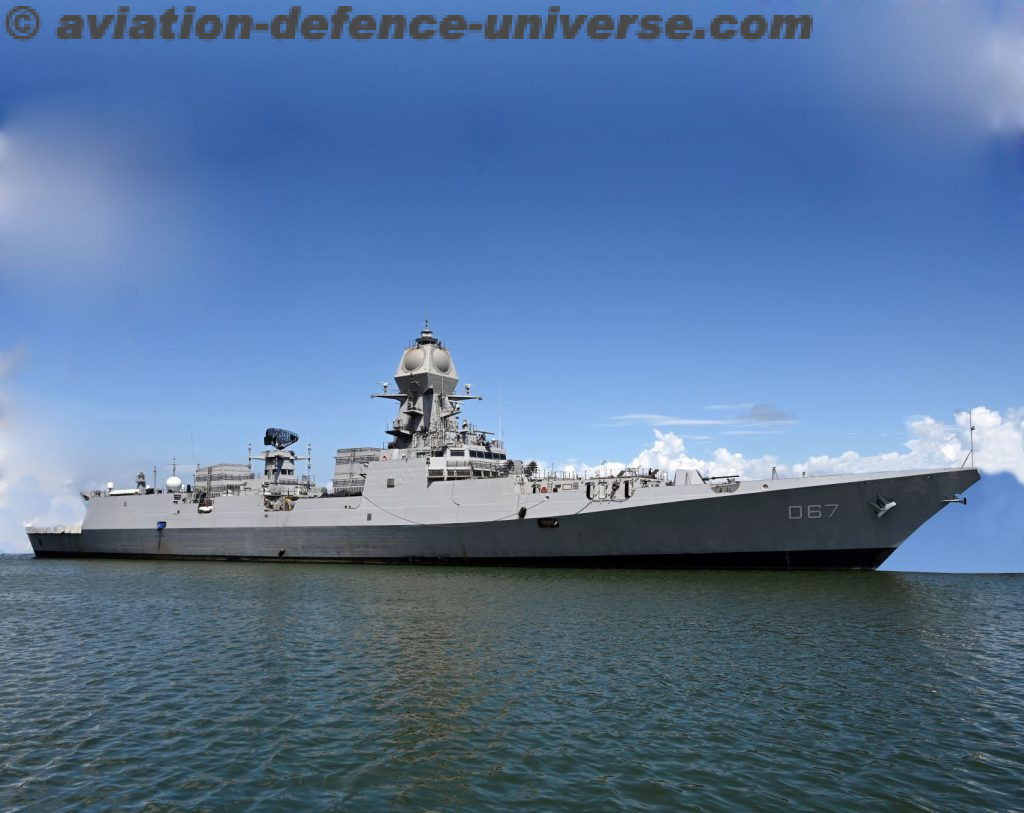 In his address, the Defence Minister Rajnath Singh described INS Mormugao as one of the most powerful indigenously-built warships which will significantly enhance the country’s maritime capabilities and secure national interests. “INS Mormugao is one of the world’s most technologically-advanced missile carriers. With over 75% indigenous content, it is a testimony to India’s excellence in design and development of warships and a shining example of our growing indigenous defence production capabilities. The warship will meet the present and future needs of our country as well as of our friendly countries across the globe,” he said. 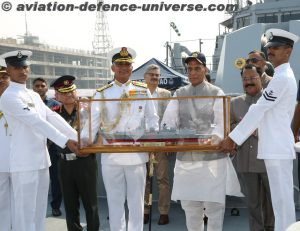 Rajnath Singh commended the Indian Navy and MDL for the commissioning of INS Mormugao, describing it as the result of the hard work, dedication and aspirations of the engineers, technicians, designers and scientists. It is a matter of great pride for India, he said. The Raksha Mantri extended congratulations to the Indian Navy on behalf of the entire nation for not only safeguarding maritime interests, but also contributing significantly to the socio-economic progress.

He described safeguarding India’s interests in the Indian Ocean Region as the prime responsibility of the Navy. “Our growing economy is directly connected to the increasing trade, most of which is through sea routes. Our interest is directly linked to the Indian Ocean. Being an important country in this region, the role of Indian Navy becomes more important in its security. It is heartening to see that they are discharging their duties successfully,” he said. 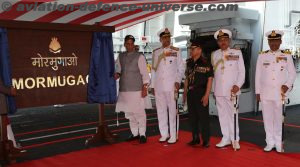 Speaking on the occasion, Chief of the Naval Staff Admiral R Hari Kumar stated that the commissioning of INS Mormugao is indicative of the large strides India has taken in warship design and building capability over the last decade. He added that the warship is a true illustration of ‘Aatmanirbhar Bharat’ and ‘Make in India’ initiative and it reinforces the Navy’s commitment to supporting India’s transformation into a global ship-building hub. The warship, with her multi-dimensional combat capability, will form part of the Western Fleet – the sword arm of the Indian Navy, he said.

Admiral R Hari Kumar complimented the Commanding Officer and his team of officers and sailors for their sustained efforts and perseverance during the trials and acceptance of the warship. He urged them to move forward with the same momentum and prepare for future operational deployments. He also commended MDL for playing a significant role in the transition from a ‘Buyers Navy to a Builders Navy’.

Stealth, fire power & manoeuvrability with indigenous content make INS Mormugao an asset to Indian Navy. Measuring 163m in length and 17m in breadth with a displacement of 7,400 tonnes, INS Mormugao is packed with sophisticated state-of-the-art weapons and sensors such as Surface-to-Surface Missile and Surface-to-Air Missiles. The ship is fitted with a modern Surveillance Radar which provides target data to the gunnery weapon systems. Its Anti-Submarine Warfare capabilities are provided by the indigenously-developed Rocket Launchers, Torpedo Launchers and the ASW helicopters.

Named after the historic port city of Goa on the west coast, the ship is equipped to fight under Nuclear, Biological and Chemical warfare conditions. It is propelled by four powerful Gas Turbines, in a Combined Gas and Gas configuration, capable of achieving speeds in excess of 30 knots. The ship has enhanced stealth features resulting in a reduced Radar Cross Section. INS Mormugao has a complement of about 300 personnel. 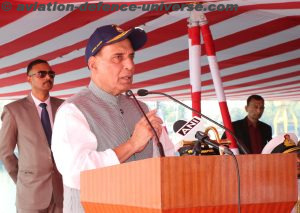 With over 75% indigenous content, all her major weapons and sensors have been developed and manufactured in India either directly through design and development by Indian Original Equipment Manufacturers (OEMs) or through strategic tie-ups and Transfer of Technology with reputed foreign OEMs.

P15B destroyers incorporate new design concepts for improved survivability, seakeeping and manoeuvrability. Enhanced stealth has also been achieved, making the ships difficult to detect. With a significantly increased indigenous content, P15B destroyers are a hallmark of self-reliance in warship design and building and a shining example of ‘Aatmanirbhar Bharat’.

With power dynamics in the Indian Ocean Region constantly changing, the ship’s all-domain capability will augment the Indian Navy’s mobility, reach and flexibility to accomplish any mission or task. Induction of the ship into the Navy also reflects India’s growing ability to remain First Responder and Preferred Security Partner in the region. 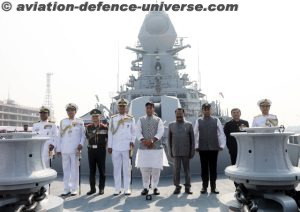 The ship was launched on September 17, 2016 and commenced sea trials on December 19, 2021, coinciding with 60 years of Goa Liberation. The commissioning on 18 December is significant as it was the same date in 1961 when Operation Vijay was launched to liberate Goa from Portuguese rule. Shri Rajnath Singh, in his address, paid glowing tributes to former Raksha Mantri late Manohar Parrikar, who hailed from Goa and had launched INS Mormugao in 2016.

During the ceremony, Rajnath Singh was presented with a guard of honour upon his arrival. The Commanding Officer Captain Kapil Bhatia then read out the Ship’s Commissioning Warrant. Subsequently, the Naval Ensign was hoisted onboard for the first time and the Commissioning Pennant broken (unfurled) on the main mast to the time of the national anthem played by the Naval Band. Before his address, the Raksha Mantri unveiled the Commissioning Plaque, dedicating the ship to the service of the nation.