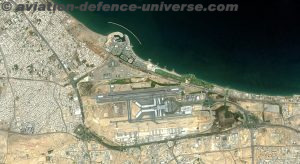 Madrid. 14  December 2022. Indra is working with the Ministry of Finance and the National Survey
Authority (NSA) of the Ministry of Defence of the Sultanate of Oman on the implementation of an
advanced Earth observation center to provide the country with critical capacity to boost the
competitiveness of its economy and improve the services provided by the authorities to its citizens.

The project forms part of the Sultanate of Oman Vision 2040 plan promoted by the country’s government to modernize its infrastructures, diversify the economy and create high-quality employment.
The new center will be equipped with Indra software capable of generating high value-added products and services based on satellite images, particularly those collected by the Sentinel constellation of the European Copernicus program, one of the most advanced currently in existence.

The company will provide advice on designing the center’s business strategy and help define the lines of
development to be followed in the coming years. The areas it will focus its activities on include maritime
traffic safety, the protection of critical infrastructures, land use control, analysis of the growth of urban areas and environmental protection.

The ultimate goal is to make the Sultanate of Oman one of the main competitors in the international Earth observation market, a sector that’s steadily expanding as the number of satellites and the quality of the data they collect increases and the costs fall. At the same time, the huge value of these data when it comes to defining public policies and business strategies means that the demand is growing exponentially all over the world.

According Domingo Castro, Indra’s Defence Systems&amp;Space Director, “Earth observation satellites are
the most powerful tool that exist for accessing accurate and fully updated information on a city, region or the entire planet at high speed. With the implementation of this center, the Sultanate of Oman will embark on a journey into a sector of the future based on the intensive use of knowledge and high technology, a task that’s essential as we move towards a more sustainable world”.

Indra will train the specialists who’ll take over the management of the new facilities and introduce them to
the space agencies, research centers and universities throughout Europe they will work with.
The project also opens up a new avenue for the career development of young Omanis, who will work with
technologies linked to cloud computing and artificial intelligence and contribute to the development of the
entire local business fabric.
In order to contribute to the development of an innovative ecosystem that attracts and connects the talent of professionals, companies and government agencies, Indra will organize outreach activities and hackathons to accelerate the initiative.

Indra is a global leader in engineering technology with operations going back over thirty years in the space sector. It has played a key role in the development of major European space infrastructures, including the Copernicus Earth observation system and the Galileo global geopositioning system. It has also deployed the ground segment of Paz, the Spanish Earth observation satellite, and it has developed  one of the most powerful space radars in the world, capable of detecting objects 2,000 kilometers from Earth. More recently, it launched Startical, a new company linked to the new space, which is working on the development of a constellation with more than 200 small satellites to provide air traffic management services around the globe.