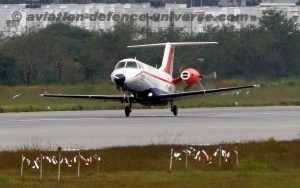 SARAS PT1N, a 14-seater passenger aircraft, is an upgraded version of the plane, aircraft took off at about 11 am from HAL airport and flew for about 40 minutes at the maximum height of 8500 feet at the speed of 145 knots.

All the system parameters are found normal and completed text book flight on 24 January 2018.

The 14-seater civil aircraft which started as a joint project of India and Russia, finally was built by NAL as the Russian state agency for civilian planes, backed out due to the financial crisis after the breakup of the Soviet Union.The plane first flew in May 2004 and the second flight met with a tragedy in 2009, when the prototype on test flight crashed in which all the three  Indian Air Force (IAF) pilots and engineers were killed.

The IAF has signed up with National Aerospace Laboratories, Bangalore for the purchase of 15 Saras aircraft. The Kanpur unit of Hindustan Aeronautics Ltd will manufacture these planes for coastal surveillance as well as training young cadets on transport flying.

The second prototype of the aircraft is overweight by 500 kg against the specified design weight of 4125 kg and needs to test fly for 40 hours and meet safety requirements, following which NAL would freeze the plane design, to be then incorporated into a production variant.

In  Feb 2017 the reconfigured first prototype was handed over to the IAF’s Aircraft & Systems Testing Establishment (ASTE), which has conducted a few low-speed ground runs and undertook high speed taxi trial on 2 January, 2018.