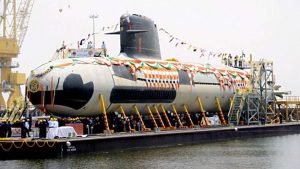 New Delhi. 24 August 2016.  It seems to be a leak which has rung the alarm bells not only for India but for the other nations who are in the fray to buy submarines from the French naval major DCNS. Australian newspaper has just this morning revealed that  Documents Marked “Restricted Scorpene India”, have  leaked combat capabilities of India’s new  $US3 bn ($3.9bn) submarine fleet and would provide an ­intelligence bonanza if obtained by India’s strategic rivals, such as Pakistan or China.

The data that has been leaked is reported to have details like specifications of the torpedo launch system, speed and condition needed for using the periscope and functioning of the above-water and underwater sensors. According to the report, the data tells the submarine crew where on the boat they can speak safely to avoid detection by the enemy, as per news reports.

“I have asked the Navy chief to study the entire issue about what has been leaked, what is there about us and to what extent. It came to my knowledge at about 12 AM. What I understand is there is a hacking. So we will find out all this,” Indian Defence Minister Manohar Parrikar told the media.

Earlier in the day a Press Information Bureau release quoting the  Indian Ministry of Defence stated that it appears that the source of leak is from overseas and not in India. 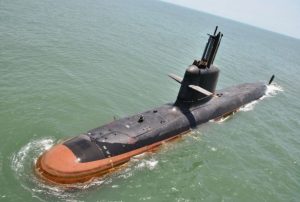 Meanwhile DCNS the French submarine manufacturer in a written statement said, “We have been made aware of articles published in the Australian press related to the leakage of sensitive data about Indian Scorpene. This serious matter is thoroughly being investigated by the proper French national authorities for Defense Security. This investigation will determine the exact nature of the leaked documents, the potential damages to DCNS customers as well as the responsibilities for this leakage”.

Defence Analyst Cmde (Retired)Ranjit Rai  stated, ” yes this is a setback but 70% of the data will be commercial sales data but if any data of Indian supplied  and fitted equipment is there then it’s a big compromise. If not it is a strategic leak not tactical and IDS is studying it. Brazil is getting Scorpene, Chile has it and akistan has Agusta which is similar.” Malaysia is also using a variant of the Scorpene.

Commodore Anil Jai Singh, Vice President of the Indian Maritime Foundation told ADU that , “There is serious classified stuff there. A lot of data is specific to the Indian programme as the documents show. I think accountability for this needs to be established at the earliest and action needs to be taken. But the fact remains that our submarine characteristics are in the open domain.”

INS Kalvari, the first of the six Scorpene diesel-electric attack submarines (SSK) of the Indian Navy, was set afloat in October 2015 for pre-commissioning sea trial for 10 months at the Mazagaon Docks in Mumbai. It is scheduled for commissioning in September 2016. The remaining five vessels under Project 75 will be delivered to the Indian Navy every nine months, by 2020.