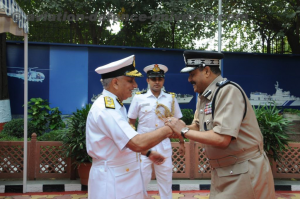 A High Level Meeting (HLM) between the Indian Coast Guard and Royal Oman Police Coast Guard was held at Coast Guard Headquarters under the provisions of the Memorandum of Understanding (MoU) signed between the two agencies in 2016. The Indian delegation for the HLM was led by Director General Rajendra Singh, PTM, TM.  The HLM focused on augmenting the operational level interaction and capacity building in areas of Search and Rescue, Pollution Response and Maritime Law Enforcement. 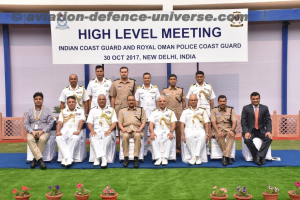 During the meeting, both sides agreed to strengthen the mutual cooperation in accordance with the provisions of the MoU.  A point of contact between the two agencies will be established for information sharing.  Both sides also agreed to exchange best management practices based on lessons learnt during exercises and operations.

In his visit to India, the Brigadier also called on senior officials of the Ministry of Defence and External Affairs.  The meeting was significant in providing added impetus to the already existing professional relationship between the Coast Guards of India and Oman.